The peaceful rural environment of southwestern England has attracted a number of leading British luthiers. One of the most distinguished of them, Hugh Manson, has lived and worked in the village of Sandford, near Exeter, for more than 20 years. He makes a wide variety of guitars - some sold at his own flourishing Exeter music store, others custom-built for famous players such as Matt Bellamy of Muse, Martin Barre from Jethro Tull and Led Zeppelin's John Paul Jones - for whom Hugh acts as a personal guitar 'tech' (technician).

Hugh Manson built his first guitar at the age of 14, and owes his reputation not just to his remarkable skills and craftsmanship, but to dedication and perseverance: as he explains, "First you have to get a foot in the door, and until you get a name it's very difficult." He now produces about 35 handmade instruments a year, and has a preference for unusual commissions; his output includes "mandolas, mandolins - everything with frets and without frets on. I made Cliff Richard's electric sitar, and I've made three-necks, four-necks, things with lights on, things with smoke coming out of them...That's really what I do, and what I want to do. I don't like to make the same guitar day in, day out."
Hugh is undoubtedly the UK's leading creator of multi-string and multi-neck electrics. Such instruments have a long history: the Martin company produced a two-neck acoustic harp guitar as early as 1902 (see photograph in Martin section); multi-neck electric lap steels were already a familiar sight in the 1930s; and many older rock listeners will treasure memories of Gibson's twin-neck EDS-1275 - the six- and twelve-stringer favoured by virtuosi such as Jimmy Page and John McLaughlin in the 1970s. Hugh Manson's designs are bolder and 'higher-tech' than any of their predecessors or contemporaries, and the clients who commission them are understandably eager to see them take shape: one of Hugh's regular customers was in such a hurry to scrutinise plans for his new guitar that they had to be redrawn onto paper that could be faxed to him!

Three of Hugh's most aesthetically and technically unique 'special projects' can be seen here; also illustrated are a trio of slightly more 'regular' instruments from his Devon workshop. He chooses the woods from which he makes them as carefully as any acoustic luthier, commenting that "the art of making electric guitars is tailoring the timber to the sound." The art of guitar building runs in the Manson family: Hugh's elder brother, Andy, famous for his flat-tops, is also based in Devon, and an example of his work can be seen elsewhere on this website. 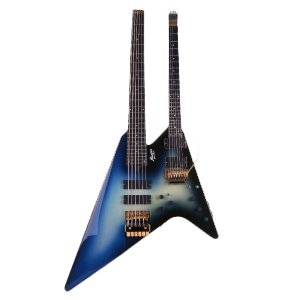 A six-string guitar combined with a six-string bass. It has a maple body and an ebony fingerboard, and is fitted with EMG pickups. Both necks are headless; the standard guitar section incorporates a vibrato and a locking nut. The strings are tuned using the adjusters on each tailpiece. 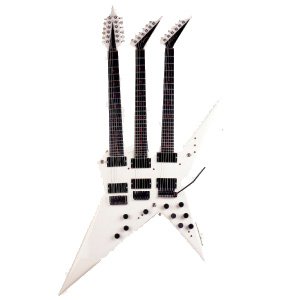 One twelve-string and two six-strings in a 'neck-through-body' design incorporating LEDs (light-emitting diodes). The body is mahogany and maple. 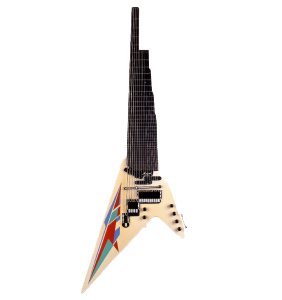 This remarkable instrument is effectively a six-string bass and a standard six-string guitar with additional high A, D and G strings. It has a maple body, staggered tailpieces to accommodate the varying string lengths, and a gradually widening neck reinforced with two truss-rods. 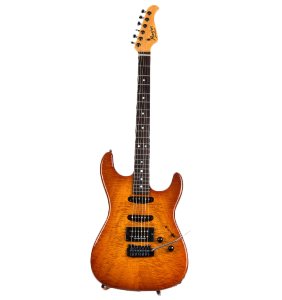 While its overall body shape is a familiar one, the 'S' offers a number of special features, including Seymour Duncan pickups - a humbucker and two single-coils - and a vibrato unit designed by Trevor Wilkinson. The guitar's front is Canadian quilted maple, and its back and sides are swamp ash. Bird's-eye maple is used for the neck, which has a rosewood fingerboard.

This 'neck-through-body' guitar was made for a jazz player, who wanted a richer, 'hollower' sound than a typical rock instrument provides. Hugh achieved it by building several air chambers between the flamed maple front and poplar sides. The five-piece neck is made from maple and American black walnut, with an ebony fingerboard. A Christian piezo-electric transducer is built into the bridge saddles; its 'acoustic' sound can be combined with the output from the Kent Armstrong humbucking pickup via a 'pan' control on the body. The extra bass string extends the guitar's compass by a fifth.

The instrument's additional top and bottom strings are both tuned to A (three octaves apart), and its triangular body decorations were all carved by hand. The neck features LEDs - switched on in our picture! - connected to a power supply via a network of wires that run through tiny holes drilled through the body.