Alessandro Gagliano is the beneficiary of one of William Henley's most imaginative and romantic essays. In his ‘Universal Dictionary', he stated that Gagliano was the son of a Marquis, a student of music banished from the city after a fatal duel who found himself alone in a forest, idly tapping trees to determine their acoustic properties. With this insight he gained a place in the workshop of Nicolo Amati and subsequently with Antonio Stradivari in Cremona, and after thirty years of study at the feet of the masters, established the Neapolitan school of Violin making in 1695. It is all tosh, sadly. There is as yet no archival proof of any biographical knowledge of the man, and one close look at his work is enough to see that he had no training in Cremona. No aspect of his technique shows any initimate understanding of Cremonese methods, and in fact, the startling thing is its originality and individual quality.

All we can surmise from his work and circumstances is that he was probably introduced to lutherie by one of the several Fussen-born lute and guitar makers established in Naples at the end of the seventeenth century. Bletschacher lists several in his ‘Die Lautern- und Geigenmacher des Fussener Landes', including Kaiser, Railich, Stadler, Steger and Tiefenbrunner. All these craftsmen were probably essentially lute makers, but they would have had much knowledge of tone woods and techniques, and would probably by this time have been experimenting with violins themselves. There was, enough to say, a thriving instrument making community in Naples at this time. What marks Alessandro apart is his investment in violin making specifically, and his observations of good Cremonese work that must have come his way. The geometry, the basic plan, but above all, the attention to detail and finish obvious in his work shows clearly where his inspiration sprang from. 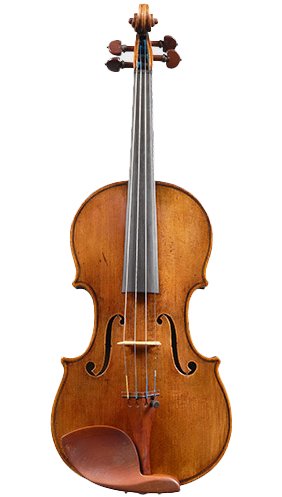 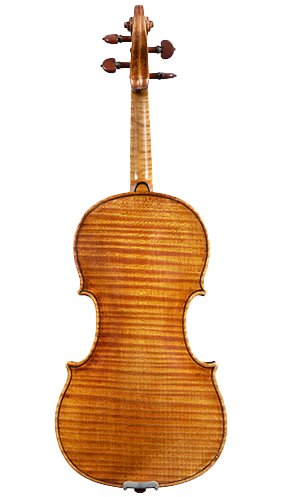 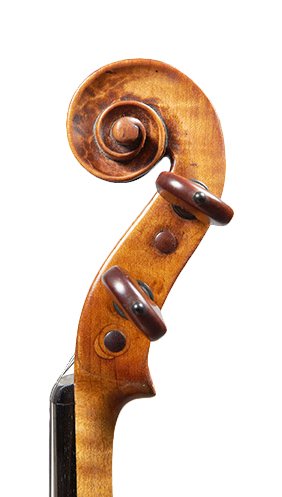 The violin in this instance, which bears a label of 1709, is strikingly classical in appearance. The soundholes have a wonderful Stradivari flow, the arching is subtle and beautifully graduated, the purfling elegant, and the varnish of absolutely the first quality, of a very rich orange-brown and with a superbly reflective ground.

But if we look beneath the skin, as it were, we find crucial divergencies from the Amati rule book.

The back is a glorious piece of quarter sawn maple, the consistent rippling flame chasing slighty upward to the treble side. It brings to mind comparisons with Alessandro's most celebrated violin, the ‘Rotondo' of 1710. The grain though is very coarse, and looks as if it might be local wood, rather than the tightly grown maple of Amati and Stradivari. The outline is very Amatise, elegant and symmetrical and very carefully managed. But typically for Gagliano, it is long, not of any known Amati model. The proportions of all his instruments are idiosyncratic- the outline lengthened, the stop exaggerated- these are marks of an individually created form. The arching is fine, but not conventional. The centre is full and rounded, quite high at the centre, but it falls away quickly to the endblocks on both back and front, leaving a broad, flat edge flute around the upper and lower bouts. In some ways it resembles the arching of very late period Guarneri del Gesu violins, but in no way does it fall into the Staineresque model almost universally adopted thoughout Europe in this period.

The purfling is made of three soft veneers, possibly all poplar or willow, but it is fragile stuff that threads its way around the edge in uncertain manner, deflected and pressed or wandering and swollen according to the vagiaries of the slot into which it fits. You can plainly see the chatter marks and splits in the wood resulting from planing each strip of veneer from the log with a deep set but not necessarily well-sharpened blade.

The ribs are made of contrasting wood, wildy and irregularly flamed maple cut on the half-slab, which gives a wonderfully lively reflection under the varnish. But the rib corners are drawn together in long joints, not the effective short mitre of Cremonese work. The long rib join is common in most ‘provincial' violin making, and betrays a method of working totally unlike the Cremonese internal mould system, possibly working without a mould at all. Internally the coarse pine blocks and linings are not morticed, nor are there locating pins in the endblocks, both of which are consistent markers of Cremonese technique.

The front is very classical in appearance too, but the very low set soundholes are characteristic of Gagliano. In this case, their very authentic Stradivarian appearance is slightly undermined by the fact that the larger part of the lower wings have been restored, in the careful but characteristic manner of the Hill workshop. The wood is first-class alpine tone wood, but the two sides appear not to be matched; on the treble side there is a fair amount of hazel figure close to the centre, and the grain patterns are not consistent.

The head also confirms Gagliano's individuality. Very often his scrolls are decorated or given some deliberate originality. No two are really treated in the same way, and on this example there is a cleft carved into the chin, and a slender triangle incised at the base. Although this has become very worn with use, the original form is reasonably clear. Alessandro Gagliano never treated his heads with the strict formality of the Cremonese, but more in the free manner of Brescian and Northern European makers. In profile the head does have several distinguishing Gagliano features; the eye is low in the spiral, and projects suddenly from the winding of the narrow second turn , very much in the way of Carlo Bergonzi. The pegbox is quite straight and slender, and the throat constricted and roughly finished. Tool marks are freely scattered around the volutes, and the workmanship is determinedly characterful rather than careful. Again, the wood is very broad-grained, probably local maple, but of a plainer nature than the back.

Alessandro's most successful attribute is his varnish, there is no doubt. It is sad that his sons seemed to reject it almost instantly, and the family name is usually associated with rather hard, yellow or deep, unrelieved brown coating. Alessandro' varnish is the real thing, the soft red-tinted and beautifully mobile and reflective stuff of the classical masters. It may have come to him via the Fussen connection and the Albani family of the Italian-German borders, who possibly also gave this beautiful red varnish to the Venetians. On this violin it has been worn by time, and polished and restored, but the glow is deep in the wood, and the subtle flashes of colour are still apparent in the edges of the back.

Alessandro Gagliano is a fascinating maker from many aspects. Working far away in the south at the same time that Stradivari was emerging as the dominant force in Cremona, he is isolated geographically and stylistically. There are few other makers in the beginning of the eighteenth century who grasped the principals of great violin making so well, and gave them a distinctive personal identity. It would be very heartwarming to find out that he really was the son of a Marquis, a tree-tapper as well as a tearaway duellist, but I doubt it. His work is outstanding, and the dynasty of luthiers he founded one of the most long-lived and productive in all of violin making history.