View this lot in our October 2014 Sale 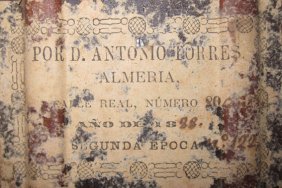 This guitar is an incredibly preserved and unopened example of the famed makers work, retaining all the original components.  It has been in the present owner’s family since 1901 and has remained largely unplayed during that time.  Previously, this guitar was owned by a gentleman who purchased shortly after its construction in 1888 and played it for only 13 years before his death in 1901.

One unusual (but not unique) aspect of the guitar is that the grain of the soundboard runs at an oblique angle. This is observed by Romanillos in guitar SE99, and is also present with respect to other Torres guitars, most importantly, Tárrega’s known rosewood guitar SE114 from the same year(2). Although eight opuses later than SE114, this guitar is so similar, that it could be thought of as a Sister guitar.

There is one possible non-original component, and that is the presence of a cylindrical metal tornavoz and my following comments concerning this is speculative (3). It is clear that Torres, who may have invented the use of the tornavoz with respect to guitars, experimented with this device over his career and an obvious development would have been to make a removable one. It is also clear that Tárrega’s FE17 once had one, which was only recently sadly separated and presently lost, yet Tárrega’s SE114 was without one. Is it possible that Torres presented Tárrega with this guitar with tornavoz as a simple solution? One thing that is certain, is that the lower harmonic bar is not open, which is normally observed in Torres’ guitars containing a fixed tornavoz, thus implying that Torres had not intended using one, when this guitar was conceived. One last point, is that the inside edge of the soundhole was not left flat, as would have been the case if Torres had originally conceived this guitar to have been fitted with a tornavoz.

There are seven fanbraces, with two diagonal ones, forming a kite-shape. Where the braces would converge, i.e. the apex of the kite, is under the fourteenth fret, which is consistent with other seven fan-braced models. The fanbraces are rounded in profile. This is something Torres did as standard, sometime after 1883; before this time the fanbraces were being gable-ended. The transverse back bars as well as the harmonic bars are all slightly rounded in profile, with the ends kept square in order to accommodate the rib-blocks and with no scalloping. This is fairly unique amongst other contemporary makers, but a routine trait of Torres’.

This guitar represents the summit not only of his achievement, but the accomplishment of any Spanish guitar maker. It is estimated that Torres’ output was approximately 320 guitars (4) of which approximately 100 authenticated examples remain extent. Although Torres is famous for his large seven fan-braced models, very few are known today; in fact less than twenty surviving Torres guitars of these fall into this category. This is partly because he also made many smaller five fan-braced models, many of which were made from inferior materials. Since many of the most sought-after models are in permanent collections, this is an exceedingly rare opportunity to acquire one.

The sound has the unmistakable Spanish sound with a deep bass and singing trebles. It has the Torres characteristic of having an open sixth-string buzz, possibly caused by the helmsoltz resonance set at E (likely the pitch ‘E’ of Torres’ time, today an ‘F’), which probably causes this phenomenon. Since the majority of surviving Torres guitars have been restored beyond Torres’ original acoustical conception, this guitar will become the one to standardise the true Torres sound.

1. Although the side plates do not fit very well, this is noticed on many of his other guitars. The reason being, that tuning machines were very expensive, and thus the choice left to Torres would have been limiting. It is noted from original catalogues and advertisements that the price set for a guitar was often established solely by the type of, or lack of, tuners.

2. The purpose for this in uncertain: whether it was for acoustical reasons, or necessitated due to Torres known hardship in obtaining less than perfect materials. The dendrochronology, carried out by Peter Ratcliff reveals that the main soundboard (bass-side) was from particularly old stock (for Torres), the latest ring dating from 1836 – could this have been the reason for Torres persistence of using this piece, planning it at an angle to utilise the maximum amount of matured material.

3.This tornavoz, probably of brass, and was manufactured as a cylinder, with no joins, i.e. not later made from sheet metal. The lip, for which the purpose is to prevent the device from falling inside, is also an original feature. However, the relief to account for the fingerboard was purposefully cut-out by hand.

4. Torres only numbered his second run of guitars (as indicated on the labels), and this accounts for 155 guitars. Since both epochs were for the duration of seventeen years, and allowing for the fact that he may have made a handful of earlier guitars, Torres’ estimated out-put is 320 guitars.

‘Investigative Methods for the Study of Historical Guitars: A Case Study of the Work of Antonio de Torres’(MA dissertation, London Metropolitan University, 2009).

The guitar has never been opened for repair before. With respect to guitars by Torres, this is an extremely rare fact and perhaps falls into the category of approximately just 1% of the extant examples (FE18 included). This is confirmed by a UV light inspection, showing that there appears to be no disturbance of the bindings: there is no touch-up of the original polish nor is there any residue of more recent glue. It is clear, however, that the woods in this guitar have, to some degree, dried out. Hence, the back fissures (indicated below), due to the nature of the figured wood, are not straight and it might be an option to leave them open. The soundboard is made of three pieces: two main pieces, with the join toward the bass side, with a smaller third piece in-between these. This was re-enforced with manuscript paper, and is certainly the work of Torres. The wedge joins the treble side of the soundboard exactly in the middle under the twelfth-fret, and therefore Torres must have thought of this as the ‘centre’ seam at the upper bout, at least. And if there were any doubt that the wedge was not Torres intention (i.e. a later repair), it runs under the rosette and fingerboard, and therefore it is certainly a part of Torres original soundboard. The main soundboard ‘crack’, running with the angled grain (see above), is in fact not a crack at all, but rather a ‘centre’ seam separation. There are two side repairs, either side of the heel, one just 1 inch long, and the other 3 inches, both were glued and re-enforced with blue lining tape (a material Torres was known to have use to re-enforce his side joins, for example with the three piece sides of SE127).There also appears to be a fingerboard crack, but this too is a opening of an original join. It appears that the original fingerboard blank was quite not wide enough, so Torres’ solution was to splice a portion to widen it in the upper register. This practise, seen in many Torres guitars, also explains the four-piece heel section (including the neck), and is typical of Torres making use of the limited materials available to him.

This guitar appears to have retained its original doming of the soundboard, having neither sunk, or pulled up. There are no signs that the frets were ever changed, meaning that the frets are original. The polish is all original, with no attempt to over polish. It is quite worn in places, for example thumb wear to the back of the neck in the first position, but it is honest playing wear, not abuse. The guitar comes with a period case which had slight insect infestation and was subsequently treated. Luckily, save for the paper label, the insects did not venture onto the guitar. 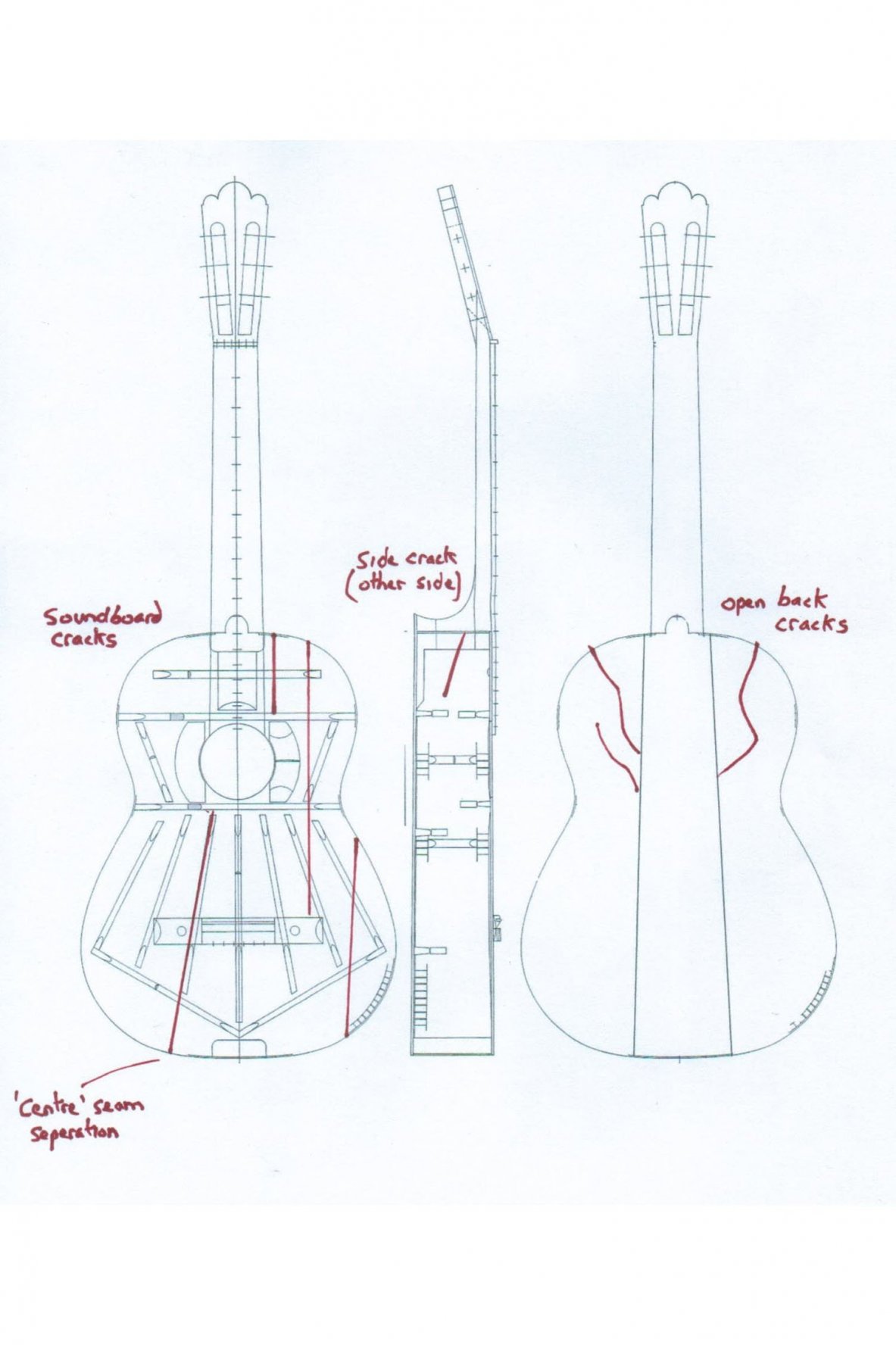