This beautiful violin, with its original label stating 'Andreas Guarnerius fecit Cremonae / sub titulo Sanctae Teresiae 1684' is fully characteristic of the Guarneri workshop at this time. Andrea himself was then a grand old man of 61, a pupil and supporter of Nicolo Amati and a senior member of the small group of luthiers that had already established Cremona as the world centre of violin making. Francesco Rugeri, his senior by three years, and the great Antonio Stradivari were active, but not necessarily part of the Amati circle. Only Nicolo, who died in the year this violin was made, or his son Hieronymus II would have outranked Andrea in any sort of luthiers guild. Guarneri also had two sons to continue his workshop and preserve the family name under the sign of St Theresa in the Piazza San Domenico. But the eldest, Pietro, had left home in about 1677 to work in Venice, leaving only Giuseppe, the younger son, to assist. In 1684, Giuseppe was eighteen years old, and probably quite experienced in his father's craft. It can be assumed that his hand is present in some degree to most of the work bearing Andrea's label from around 1680, as his father worked through old age to his final year of 1698, when he died at the age of 75. However, his activity in the later years was probably limited, and the Hills give evidence of work labelled independently by Giuseppe as early as 1690, only six years after this violin was completed, and by which time the younger man's own style was fully formed. Giuseppe later became known as Giuseppe 'filius Andrea' in order to distinguish him from his son, the great Giuseppe Guarneri del Gesu, but his own achievement as a violin and cello maker is of course substantial. 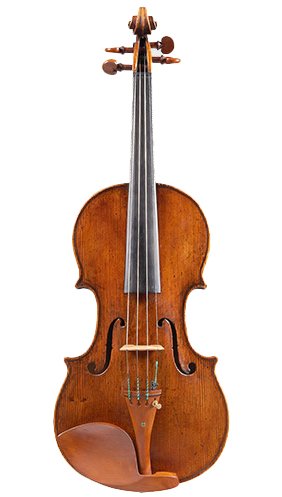 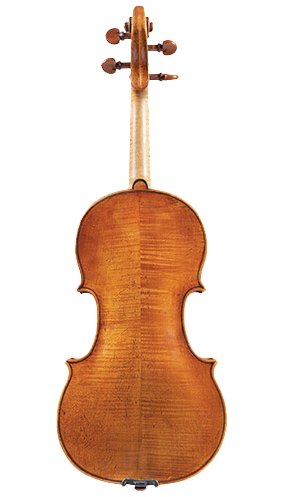 This violin is a superb and characteristic example of the Guarneri workshop in this period. The back has a full, luxuriously rounded arch springing from a small but emphatically worked edge channel, with typically delicate margins. The wood is a little plain, as is often the case, but it is a flawless piece cut from matched quarter sawn halves. The purfling is a little ragged, compared with the flawless work of Amati and Stradivari, and entirely typical, although the very distorted points seen on Andrea's early work, where the tip of the purfling mitre is deflected sharply across the corner, have evolved into a longer, straighter, if still somewhat unsteady tip.

On the table, some of the original purfling has been lost to repair work on the exposed edges, but sufficient remains to fully harmonise the instrument. As with the back, the wood is not of the most outstanding quality, the grain is a little broad and slightly wavering, but is good alpine spruce, given a strong, stable arching. The soundholes are beautifully poised and certainly reflect the style of Andrea, freely cut, open, rather slanted across the front, the nicks emphatic and the lower wings deftly fluted.

The scroll is a definitive piece, charming and forceful, a slightly impressionistic version of the Amati prototype. It sums up Andrea's workmanship entirely; faithful absolutely to the principals, methods and proportions of his teacher Nicolo, but rendered with more freedom, or perhaps just less finesse. The distinctly 'comma shaped' eye identifies Guarneri work, and seems to have gradually developed in the cutting of the last turn, to the point where the broad tail seems to overwhelm the diminished eye in the very last scrolls made by Giuseppe 'filius Andrea'.

The varnish is a beautiful pale golden brown, wholly transparent and supple, but rather over polished through time and continued use and upkeep over three hundred years.