Father of the Spanish Guitar

Much the same as Antonio Stradivarius perfected the construction of the violin during the second half of the seventeenth century; the nineteenth century saw the equally important birth of the modern Spanish guitar under the hands of Antonio de Torres. There can be no doubt that his instruments represent the standardisation of the ‘modern’ Spanish guitar and the summit of achievement of late nineteenth-century guitar design.

The work of Torres led directly to the basic form of guitar which we know today.  Even now many makers continue to follow Torres’ construction methods and design very closely, and no other maker since Torres has had quite the same influence on guitar design.

Torres was striving to make guitars with a larger and more flexible soundboard hence the need for a more uniform bracing pattern to support the tension of the strings. He set out struts geometrically based on two isosceles triangles forming a kite shape. He varied the number of braces according to the overall size of the soundboard; generally speaking he used seven fan-braces for the larger models and five for the smaller ones. In conjunction with the doming of the soundboard these struts created a much stronger structure, comparable to the table of a violin. This inherent strength meant that the soundboard could be worked quite thin without the danger of collapsing in front of the bridge. This was something that most other European makers could not even start to visualise, contemporary instruments having only one or two transverse braces.

Torres’ exceptionally gifted talent was that he knew exactly how to work the wood, no matter the quality. Torres sometimes produced a guitar from scraps of wood that no maker would contemplate using today and turn these into a guitar that few other makers could ever achieve.

The success of a maker is usually judged by the sound and playability of their instruments. Although this can only be partially witnessed with the surviving playable Torres guitars, there can be no doubt as to his fame as he was patronised by the leading players of the day, and for many decades afterwards. For example Julián Arcas  and Francisco Tárrega.  Tárrega, one of the most famous composer/arrangers for the Spanish guitar, was among the first to transcribe the works of great composers such as Schumann, Chopin and Beethoven which helped establish the guitar as a serious classical instrument.  It is significant that Tárrega in turn went on to patronise Antonio de Torres, playing at least three of his guitars during his career. Tárrega was an influential teacher to the second generation of the Tárrega School of playing, for example: Domingo Prat, Miguel Llobet and Emilio Pujol.  Not surprisingly these influential musicians were all Torres players too, solidifying Torres’ superior design as the benchmark for Spanish luthiers.

In 1888,Torres constructed guitar SE122 – a large seven fan-braced model, it is an incredibly preserved and unopened example of the famed makers work.  It retains all the original components, and has reputed lineage to the maestro Francisco Tárrega. This guitar represents the summit not only of Torres’ formidable achievement, but of any Spanish guitar maker.

SE122 maintains its original soundboard bracing and doming, the original thicknesses of the woods and polish, astonishing as only approximately 100 authenticated examples remain extant from an estimated total output of 320 guitars. This is relatively low, but not surprising since, the majority have had to survive the sometimes harsh and extreme weather conditions of Spain. Additionally Torres took the thickness of his woods down to absolute limits which is sure to have contributed to the low survival rate.  This guitar’s remarkable condition is likely due to its short playing life of 13 years before lying unused in its contemporary case for over 100 years.

Since the majority of surviving Torres guitars have been restored beyond Torres’ original acoustical conception, SE122 will become the one to standardise the true Torres sound. Furthermore, because many of the most sought-after models are in permanent collections, this is an exceedingly rare opportunity to acquire one. And just as Stradivarius’ instruments take on names of their prior owner or tonal character, some Torres guitars too have been assigned names. The Brompton’s Torres, as it is temporarily known, is perhaps waiting to be assigned a more permanent sobriquet by its next owner. 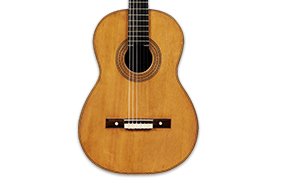 This guitar is an incredibly preserved and unopened example of the famed makers work, retaining all the original components.