Italian violin making benefited from a great many immigrant craftsmen in the seventeenth and eighteenth century, and Carlo Ferdinando Landolfi, to judge from the many variations of the spelling of his name on Milanese documents, was one such. Officials seemed to have difficulty transliterating from the original German, and alternative spellings still abound. He arrived in Milan in the middle of the eighteenth century, presumably already with some training in the craft, but in early instruments this seems to be subsumed under the influence of Paolo Antonio Testore, for whom he undoubtedly worked. He nevertheless clung to a very Germanic form of scroll, large in diameter but quite narrow, and with an extra quarter-turn behind the eye. 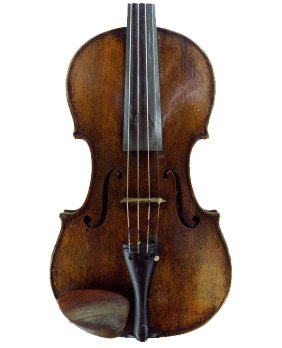 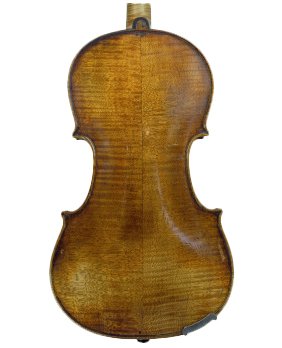 In Milan he would have encountered G.B.Guadagnini, a more sophisticated and subtle craftsman than Testore in every way. Some of his very best instruments were made in Milan between 1749 and 1758, and these surely inspired Landolfi to raise his game. He learned the new low, Stradivarian arching model, improved his level of finish and varnish, and became more thoroughly Italianate. He never really acquired the consistency of the greatest makers however, and his Germanic origins inform all his work to a greater or lesser extent. This is seen either in the form of very broad purfling, or soundholes set very close to the edges, and cut with flared, axe-head shaped wings. His varnish developed rich red shades, and a very refined quality, but various hues and textures are encountered in his various and varied output.

His labels give his address in Via S.Margarita in Milan, and they are dated from the very early 1750s until after 1780, some late examples having 'in Balleno Laro' added, this possibly being his retirement villa on Lake Maggiore. He sometimes branded his instruments on the back.

Although his work is stylistically varied, there are several quite consistent quirks of workmanship which help identify his work. He customarily pinned the lower ribs to the bottom block, and used pine throughout the interior, morticing the 'c' bout linings to the corner blocks. At the corners, the ribs meet in a slightly haphazard way, rather than the neat overlapping mitre exhibited by most Italian makers. The locating pins which fix the plates to the upper and lower blocks are usually small, but placed well inside the purfling. His purfling has a broad slab-cut poplar core, and the blacks are often poorly stained, and possibly also made from poplar wood. The edges are deeply trenched, and the ridge rolled well over towards the purfling. The head is formed with a slender and rather straight pegbox, the volute deeply undercut, and the extended last turn exposing a large proportion of the eye from the rear view. Soundholes have rounded nicks, and another general- and rather Germanic- feature in that the points of the wings are set further across than the actual apex of the arm of the soundhole itself.

Landolfi produced a wide array of instruments, including several small and medium-sized violas and compact cellos, rather in the style of Guadaginini. All these are found in hugely differing qualities, from Testore-like unpurfled pot-boilers, to quite sophisticated and elegantly crafted examples, and from exaggeratedly Stainer-like high archings to low Stradivarian styles. He was obviously very secure in his craftsmanship and technique, and was able to turn his hand to almost anything that business required. He passed on his skills to his son, Pietro Antonio, who tended to amplify some of the poorer aspects such as the high arching and more flamboyant stylistic touches, and seems to have had a chippier varnish recipe. His work is comparatively rare, and it must be supposed he did not sustain his father's enthusiasm and energy. More important as a pupil of Carlo Ferdinando is Pietro Mantegazza, who became a particularly skilful maker, the leading luthier of the next generation in Milan, and a major informant of Count Cozio di Salabue.