The Stick® is an ingenious and versatile stringed instrument with a substantial base of players throughout the world - of whom Tony Levin, famous for his work as a bandleader and with King Crimson and Peter Gabriel, has long been the most prominent. The Stick's inventor, Emmett Chapman (born in 1936 as Emmett Pardee Jr.; after his parents' divorce and his mother's remarriage, he took the surname of his new stepfather), started out as a jazz guitarist. In 1964, while stationed with the U.S. Air Force in Omaha, Nebraska, he built himself a nine-string electric (illustrated here), and used it to develop some highly original fingering techniques. As he explains, "I was playing complex chords in the style of jazz pianists, while trying to free my melody lines....[and] I had the urge to play standing up, sliding my left hand around on the fingerboard, and doing one-handed hammer-ons and hammer-offs." Hammering - sounding a string by pressing it firmly onto the fingerboard (or releasing it vigorously) - is normally done by the player's fretting hand. However, during a practice session in August 1969, Emmett Chapman repositioned his right hand perpendicular to the fingerboard, and began using both hands for hammering. This breakthrough revolutionised his playing style: "I threw out ten years of jazz guitar playing and started over."

Emmett Chapman's 'two-handed tapping' enabled him to "do the common scalar techniques with both hands equally," combining chords and melodies in a rich, varied range of textures. He modified his own guitar to take full advantage of these possibilities, changing its tuning, lowering its action, raising the pickups, incorporating a string damper, and creating a double strap system to position the instrument more vertically. In 1970, he built a bodiless version of his newly evolved 'Electric Stick' from an ebony board. This ten-string model went into commercial production four years later.

Emmett and a small staff continue to produce the original Stick configuration from their headquarters in Woodland Hills near Los Angeles. Other variants are also available, including the twelve-string Grand Stick® introduced in 1990, the eight-string Stick Bass®, and the Alto Stick®, a ten-stringer that produces "a more guitar-like range. 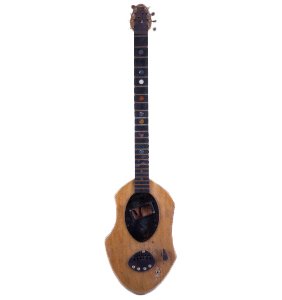 Emmett Chapman built this unique guitar, which led to his discovery of two-handed tapping, in the woodshop at the USAF base in Omaha, Nebraska, where he was stationed. It was his first attempt at instrument-making, and originally had nine strings, but later underwent extensive modification. It is a neck-through-body design, with a centre section of maple; the pickup assembly has been removed, but the bridge, jack socket, and one of the controls are still in place. 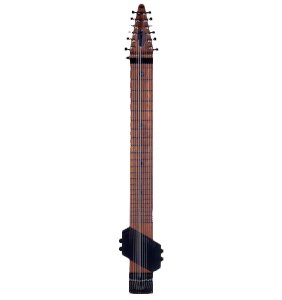 This example is made from laminated cherry wood. Unlike many electric guitars, whose fingerboards have a slight camber, the Stick's playing surface is absolutely flat. Its frets are stainless steel rods, slid into place from the side of the neck; they are far more durable than fret wire, and are round and smooth to the fingers. The strings are divided into two groups - melody and bass - with the lowest pitched strings placed in the centre. Their heights, lengths and positions can be individually adjusted via the bridge and tailpiece assembly. 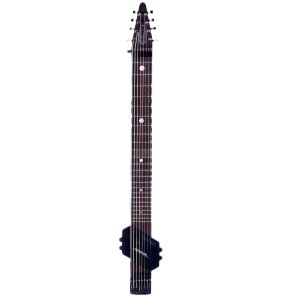 Unlike the standard and Grand Sticks, the Stick Bass has a more conventional 'top-to-bottom' tuning system. Its eight strings are pitched in fourths, with the lowest (B) string corresponding to a note a fourth below the bottom (E) string of a bass guitar or double bass. (Other tunings can also be used.) The Stick Bass's neck and overall dimensions are the same as the ten-string Stick's, but with wider spaced strings. It is fitted with active EMG pickups, switchable from stereo to mono.