Domenico Montagnana, 'the mighty Venetian', as he was dubbed by the Edwardian writer Charles Reade, was born in the village of Lendinara close to Venice, in about 1687. He came to the city itself at the very end of the seventeenth century, where he probably entered into an apprenticeship with Matteo Gofriller. Gofriller was at that time the only significant violin maker in the city, but already very successful and noticeably prolific in the production of cellos. This was of course a line Montagnana was to follow. Gofriller's work is very variable in style, open to many influences, but always showing a very forceful character and a very appealing sense of style. He must have been the perfect master for Domenico. Another craftsman who probably worked alongside him in the Gofriller workshop was Francesco Gobetti, born in nearby Udine in 1675. A little older than Montagnana, he nevertheless appears to have become his assistant, as Gobetti's often very refined and distinctive handiwork can sometimes be detected in early instruments bearing the Montagnana label, but only relatively rarely appears under his own name. He was obviously not a robust individual, and died in 1723. 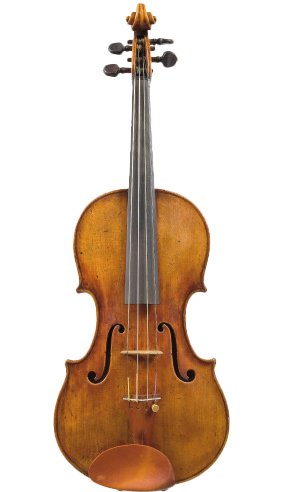 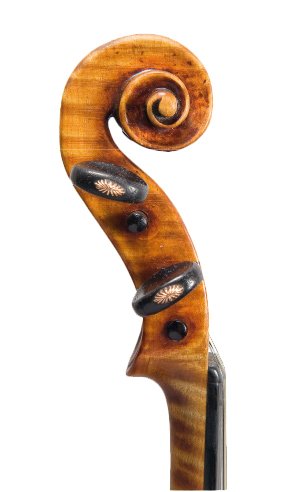 Montagnana may have established his own shop as early as 1711, but his earliest instruments date from 1720. It is hard to distinguish a straightforward chronological development of his style, since he adopted various models and patterns throughout his career. It might even be said that the distinguishing features of his work are present from the beginning. Most noticeable and obvious of course is his varnish; a deeply pigmented recipe in the classical tradition, laid on in several coats of oil and resin over a characteristically golden-coloured ground. Usually quite thick and soft, it is very often highly textured with craquelure. This phenomenon is seen in many great makers of the classical period, although it s rare in Stradivari. In Montagnana, it is fairly extreme, and the varnish seems to have pulled itself apart into tiny islands, sometimes like rubies strewn across a table, but more often it is just a complex pattern of cracks and checks across the varnish surface. It is most likely due to the presence of strong driers in the varnish, which has caused the different coats to dry at different rates, which causes stresses in the finished varnish coat. It may also have been that Montagnana himself was a little impatient with the application, and laid the varnish on too thickly and too fast.

The result is that the instruments are often very dramatic in appearance, whether the varnish is mostly intact and deep red in colour, or is very textured and patinated. Once the surface has lost its integrity, it becomes very vulnerable to all forms of patina, which integrate themselves into the varnish and become difficult to disperse again. Consequently, Montagnanas often present a very dark appearance which lights up dramatically when intense light strikes the deep pigmentation that has become masked by surface dirt.
His violins follow many forms, including the then fashionable Stainer model, with high, fluted archings, and paddle-shaped soundholes. Other instruments have more conventional Stradivari-like low arches, or Amati-influenced rounded arching, with appropriate soundholes. The wings of the soundholes themselves are rarely fluted, however. Montagnanas scrolls have an improvisatory style to them, with open windings that are not necessarily regular or evenly concentric, but deeply worked and quite striking, with a narrow, unevenly applied chamfer. A noticeable feature of his cello scrolls it that the chin, in the side aspect, abruptly changes course, and instead of following the predictable curve of the rest of the pegbox, adopts a much flatter curve.

Which brings us to the cellos. Passing from the violins, and the sole known example of a viola made by Montagnana, a fiercely large instrument that was played by Lionel Tertis for some years, the cellos are quite original in concept, and stand as one of the high points of Italian lutherie in the classical period.

Montagnana developed his own model, at a time when cello design was very fluid, and shifting in size and specific proportion from place to place and almost from year to year. Montagnana's cello form is relatively short, but very wide, especially in the centre bouts, and this seems to provide a great volume, and a large vibrating area of wood at the heart of the instrument, resulting in enormous sound. Valued by many players above the Stradivari cellos of the breat 'B' form, they are almost the 'del Gesu' of cellos, providing the earthy, powerful counterpoint to Stradivari's refined clarity. His instruments are associated with many of the finest cellists, from Gregor Piatigorski to Yo-Yo Ma, Lyn Harrell, Steven Isserlis and Heinrich Schiff in the present day.

He is also credited with at least one exceptional double bass, a magnificent arch-backed instrument dating from his last period, around 1747.

Montagnana died in 1750, but his immediate legacy was limited. His business passed to his son-in-law, Giorgio Serafin, the son of Santo Serafin. Although this may have seemed an ideal confluence of two of the greatest Venetian workshops, in reality Giorgio did not live up to the reputation of his forbears. Although a very able craftsman, his output was limited, and no cellos of his are known. But Montagnana's influence is detectable in the work of lesser Venetian makers such as Domenico Busan and Giacinto Santagiuliana, and Julio Cesare Gigli of Rome. Today, his cellos provide inspiration for a whole new generation of instrument makers, and the 'Montagnana model' is widely used for new cellos, as an alternative to the Stradivari Forma 'B', which served as the almost universal template throughout the nineteenth and twentieth centuries.