Epaminondas ('Epi') Stathopoulo (1893-1943) became President of his father Anastasios' New York-based instrument building company, the House of Stathopoulo, in the 1920s. For a number of years, the company had concentrated on banjo-making, and it was renamed the Epiphone Banjo Corporation in 1928. But in the early 1930s, Epiphone changed direction, focusing on the design and production of archtop guitars, and providing the market-leaders, Gibson, with some serious competition.

Epiphone constantly sought to outdo Gibson's innovations. It challenged the dominant position of the L-5 with the launch of its 'Masterbilt' range in 1931. When Gibson increased the body sizes on its guitars, Epiphone made its products a little larger still. And the company's two highly-acclaimed flagship archtops, the De Luxe (1931) and the Emperor (1936), were conceived as direct rivals to their Gibson counterparts, the L-5 and the Super 400.

But Epiphone was certainly not a mere imitator. Its guitars were the fruit of many years' experience in stringed-instrument construction, and were immediately recognisable onstage, with their grooved headstocks and elegant pearl inlays. Perhaps the most famous of these embellishments was the 'wandering vine' that decorated the space between the machine heads on some Epiphones; the company also used distinctive floral, diamond, and cloud-shaped fingerboard markers. Another notable Epiphone feature was the 'Frequensator' tailpiece (seen here on a 1941 Emperor), intended to 'equalise' treble and bass response by shortening the top three strings' path from bridge to tailpiece, and maximising the length of the lower strings. The 'Frequensator' made little or no real difference to the sound, but the simple elegance of its double trapeze design ensured the unit's lasting popularity.

Epi Stathopoulo died in 1943. His company's post-war fortunes were chequered, and earlier Epiphone designs underwent significant changes after 1945. Our 1951 Byron electric archtop exemplifies some of these. A lower-price model, the Byron made its initial appearance in about 1939 as a non-cutaway acoustic. When the firm used cutaways, it normally favoured the rounded, Venetian style, but most unusually, the 1951 Byron in our photo has a sharper Florentine cutaway, as well as a pickup that appears to have been factory-fitted - although the guitar is not listed as an electric model in the standard vintage guitar guides. It retains the relatively small body size, 'centre-dip' headstock, and single-trapeze tailpiece found on its pre-war namesake; during this period, Epiphone only fitted 'Frequensator' tailpieces to higher-end guitars. This model is 16.375 inches (41.6cm) wide. It features Epiphone's famous 'wandering vine' design on its headstock, whose off-centre indentation is another early Epiphone 'trademark.' The top is spruce, the back and sides maple. 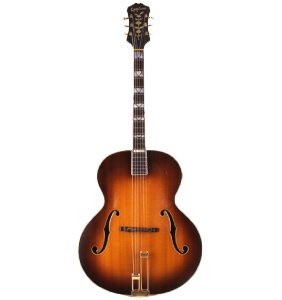 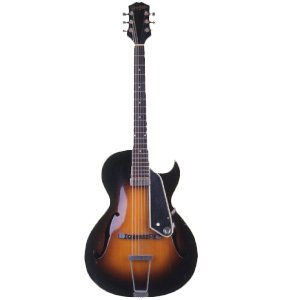 The Byron, with its relatively small 15.375 inch (39cm) width, was at the low end of the Epiphone range; however, it is an attractive instrument with a solid spruce top and a mahogany body. Because of its Florentine cutaway, this example would be worth a considerable sum to a vintage guitar collector.

In 1953, Epiphone was sold by the Stathopoulo family, and four years later it was acquired by Chicago Musical Instruments (CMI), the owner of its arch-rival, Gibson. For the next thirteen years, both brands were built at Gibson's headquarters in Kalamazoo, Michigan, and the rest of our featured guitars date from this period.

Epiphone now mostly served as a cheaper 'companion line' to the Gibson range. It was controlled by Gibson's President, Ted McCarty (1910-2001), who began introducing new Epiphones soon after the takeover. Some had strong similarities to more upmarket Gibsons: for example, both the Epiphone Olympics illustrated here closely resemble Gibson's Melody Maker solid-bodies (see Gibson section). However, other Epiphones have no direct Gibson counterpart; among these is the Crestwood, probably aimed at would-be Gibson SG owners whose finances could not stretch to the more expensive guitar. Another entirely new (and rather odd) Epiphone was the Professional, which made its debut in 1962. Its double-cutaway body is reminiscent of the Gibson ES-335, but there is only one pickup, whose standard volume and tone knobs are mounted on the bottom right of the pickguard. The knobs and miniature switches on the opposite side allow the player to adjust volume, tone, and various effects on a separate amplifier unit. This 'remote control' concept was not especially successful, and the Professional was dropped from the Epiphone catalogue in 1967.

Instruments closely related to pre-Gibson ('New York') Epiphones were also made at Kalamazoo. The Deluxe (with its name now spelt without a space) was a cutaway variant of the original De Luxe. The Gibson-era Emperor built on changes already instigated by the old, independent Epiphone, which had launched an electric cutaway version of the guitar in 1952; it had three pickups, and was intended to provide an attractive alternative for would-be Gibson ES-5 purchasers. Gibson gave the electric Emperor a thinline body, and later replaced its 'New York-style' pickups with its own 'mini-humbuckers.' The Emperor was discontinued in 1970 - the year when Gibson changed its policy over Epiphone, transferring the brand's production from Michigan to the Far East. 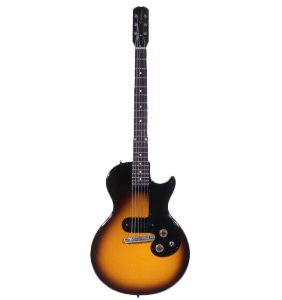 The Olympic was introduced in 1960 - a year after the Gibson Melody Maker with which it shares so many similarities. Early versions of both models feature one single-coil pickup mounted in the bridge position, and a characteristic cutaway body with a Les Paul-like outline. 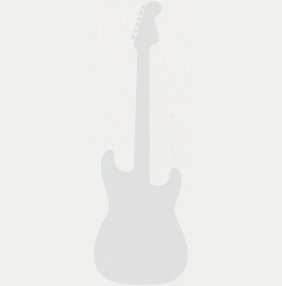 By 1961, the Gibson Melody Maker had gained a double cutaway, and a year later the same feature appeared on the Epiphone Olympic, which - like its Gibson counterpart - was also available in one- or two-pickup versions, and with a vibrato. The Crestwood was the first of the Kalamazoo-made Epiphone solids; it was launched in 1958, and underwent a number of design changes over the following twelve years. Its two humbucking pickups are smaller and lower in output than those found on Gibson instruments. 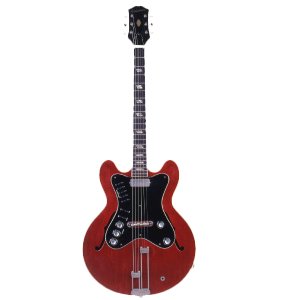 The Professional, in production from 1962-1967, was intended for use with its own amplifier, and the player can adjust the amp's tremolo, vibrato, and five 'Tonexpressor' settings directly from the instrument.

This later, cutaway Epiphone was made by Gibson. It is fitted with a 'floating' De Armond pickup - a transducer popular with many archtop players, as it attaches to the neck and pickguard, and does not affect the guitar's acoustic sound. 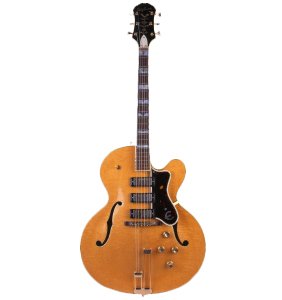 This Kalamazoo-made Emperor has a single Venetian cutaway, and boasts the 'mini-humbucking' pickups designed by Seth Lover and used on a number of other 'Gibson-Epiphones.'