During World War II, Gibson manufactured no electric guitars, and its production of acoustics was severely restricted: however, a new flat-top 'SJ' instrument emerged from Kalamazoo in 1942. Confusingly, its initials stood not for 'Super Jumbo' (see previous SJ-200 description and photo), but 'Southerner Jumbo.' The Southerner was a 16-inch (40.6cm), mahogany-bodied flat-top (although some wartime examples had backs and sides made from maple). It remained in the catalogue, with minor alterations, for over 30 years, and among its devotees were the Everly Brothers, who featured it on Wake Up, Little Susie, and several other hit records. In 1954, Gibson introduced a natural-colour version; this was named the 'Country-Western' two years later, and is shown here.

Gibson's acoustic sales were boosted first by the late 1950s folk music boom, and, a little later, by the advent of the Beatles. In the group's early years, both George Harrison and John Lennon regularly used the J-160E jumbo (strictly an electric-acoustic, despite its body shape; it had a laminated top, and a single pickup at its neck). Another popular model from this period was the B-25, which appeared in 1962; the example in our photo was specially selected for its owner by the distinguished British jazz guitarist John McLaughlin, who was working behind the counter at a London guitar store at the time!

Norlin's takeover of Gibson (see earlier) led to some controversial changes in the firm's acoustic production methods. These included the introduction of double X-bracing on flat-tops, which succeeded in making the guitars more resilient, but impaired their tone-quality. Following the arrival of Henry Juszkiewicz and his new management team in 1986, such detrimental practices were reversed, and a further shake-up occurred in 1987, when Gibson acquired a former mandolin factory in Bozeman, Montana, and re-equipped it for acoustic guitar production. Since 1989, all Gibson flat-tops have been made there, while construction of other instruments continues at its Nashville headquarters.

The company's recent output of acoustics - both new models and classic older designs - has been highly acclaimed by musicians and dealers. Staff at the Bozeman plant use a combination of craft skills and computer-controlled technology to build their instruments; there is also a busy Custom Shop for special orders and limited editions, and many discerning player-collectors compare Gibson's Montana-made guitars favourably with their vintage originals.

This guitar has a spruce top and mahogany back and sides. It features a rosewood fingerboard displaying the company's distinctive 'double-parallelogram' inlays, which are also seen on many Gibson electrics.

At 14.25 inches/36.2cm wide, the B-25 is smaller than the Country-Western, but is made from the same woods, and has a similarly shaped pickguard with a point on its outer edge. The guitar remained in production until 1977. 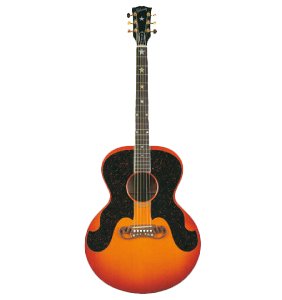 A model based on the 'Everly Brothers' Jumbo introduced by Gibson in 1963, and later renamed the J-180. Don Everly, the older of the two famous siblings, was responsible for designing the instrument's distinctive double pickguards, which were also fitted to the customised SJ-200s used by him and his brother Phil before the launch of their own flat-top. 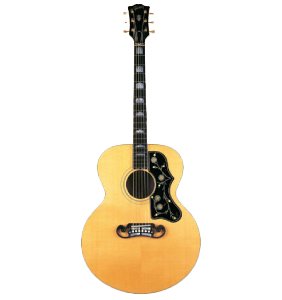 A fine recent example of the celebrated SJ-200 design. Its top is sitka spruce, the back and sides flamed maple. 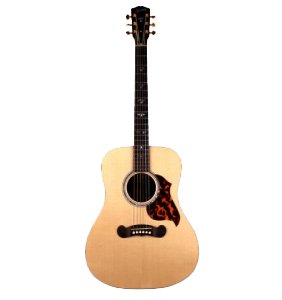 One of a range of innovative acoustics introduced by Gibson since the opening of its factory at Bozeman, Montana. The CL-40 has a spruce top, rosewood back and sides, and an ebony bridge and fingerboard.