Gibson continued to refine and develop its archtop acoustics throughout the 1930s. The L-5 maintained a high profile within the range, but Lloyd Loar's design underwent a number of modifications in the years following his departure. In 1934, Gibson addressed a perennial need for extra power and volume by increasing the guitar's body width from 16 inches to 17 inches (40.6 to 43.2cm). Three other 'L' models (the L-10, L-7 and L-12) were simultaneously enlarged by the same amount, and 1934 also saw the introduction of a new, top-of-the-line archtop with an 18-inch (45.7cm) body, the Super 400. This lavishly decorated Gibson 'flagship' took its name from its $400 price tag; it boasted gold-plated tuning machines, pearl inlays, an ebony fingerboard, and an elaborate, hand-engraved tailpiece. The Super 400 was highly acclaimed among the guitarists who could afford one in the harsh economic climate of the mid-1930s, and retains its special status today - though some players find it too large for comfort, and question whether its acoustic sound is significantly more powerful than a 17-inch Gibson's. (See later for electric versions of the L-5 and Super 400.) 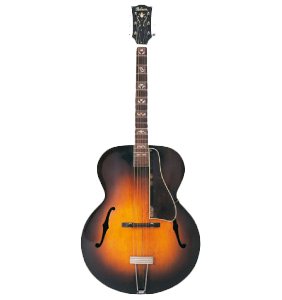 The L-7 first appeared in 1933, and was enlarged as described above in 1934. This example features delicate mother-of-pearl 'picture-frame' inlays on its fingerboard. 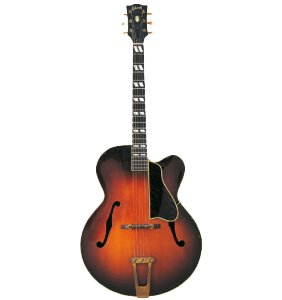 The L-12 was introduced a year before the L-7; this cutaway 'Premier' version (hence the 'P' suffix) debuted in 1947. Its 'crown' headstock inlay and parallelogram fingerboard decorations can also be seen on more recent Gibsons.

This is a modern replica, with a 24-carat gold tailpiece, of a 1939-style Super 400. Like the original, it has a sitka spruce top; maple was used for its back and sides, and its fingerboard is ebony. A magnetic pickup is attached to its pickguard; as this does not touch the top, it cannot mar the guitar's acoustic sound.

Gibson was comparatively slow to approach the Martin company's level of commitment to flat-top acoustics, producing none until 1926 - when it launched just two such instruments. One of these, the L-1, shared its name with a recently withdrawn Gibson archtop; its companion, the L-0, was priced more cheaply, and both had 13.5-inch (34.3cm) bodies. Gibson's third flat-top, endorsed by the American vaudeville and cabaret performer Nick Lucas (1897-1982), appeared in 1928. Six years earlier, Lucas had recorded some of the first jazz-influenced guitar solos, including the classic Teasin' the Frets, and in 1929, he enjoyed even greater success with his million-selling hit, Tiptoe Through the Tulips. Despite costing $125, the Lucas model was very popular; and over the next few years, Gibson's flat-tops made a considerable impact on the market, as the company responded to Martin's OMs and Dreadnoughts with innovations of its own.

In the early 1930s, it brought out some budget-price models, of which the most basic was the L-00; introduced in the firm's 1932 catalogue, it remained available until the end of World War II. Early examples, like the one shown here, had a black finish, and are thought to be the first Gibsons ever issued in a single colour. A more prestigious, larger-bodied flat-top, the 'Jumbo', was launched in 1934. The original was superseded after two years by a pair of new designs, the 'Advanced Jumbo' and the 'Jumbo 35' (J-35). All were 16 inches (40.6cm) wide, with 14 frets clear of their bodies. Like Martin's Dreadnoughts, they featured X-braced tops, but were slightly shallower and more 'round-shouldered' than their rivals. They were competitively priced: the Advanced Jumbo sold for $80 and the J-35 for only $35.

The next Gibson Jumbo (the elephantine name was quickly 'borrowed' by other manufacturers of larger flat-tops) was the Super Jumbo or SJ. It evolved from a collaboration with 'cowboy' singing star Ray Whitley (1901-1979), a major figure in pre-war radio and films. The instrument he helped to develop came to be known as the SJ-200, and made its first appearance in 1938. The '200' referred to its $200 price tag, and its lavishly decorated body, originally 16 7/8 inches (42.9cm) wide, was later enlarged to 17 inches (43.2cm). It had a more pronounced waist than Gibson's previous Jumbos, a distinctive, pearl-inlaid 'moustache' bridge, and a large pickguard engraved with flowers and vines. The guitar was manufactured in limited quantities throughout the war years, and rechristened the J-200 in 1947. It is one of the most instantly recognisable and highly regarded of all Gibson acoustics, and the many stars associated with it include Elvis Presley, Emmylou Harris, Rick Nelson, and bluesman Rev. Gary Davis - who used to call his J-200 'Miss Gibson.' 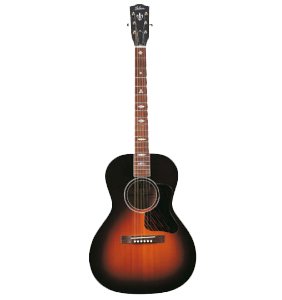 A modern replica of Gibson's first top-quality flat-top guitar, launched in 1928. It has a spruce top, and back and sides of maple. The original model had 12 frets clear of the body, but by the mid-1930s, the 'Lucas' had been given a neck like the one shown here, with 14 frets easily accessible. 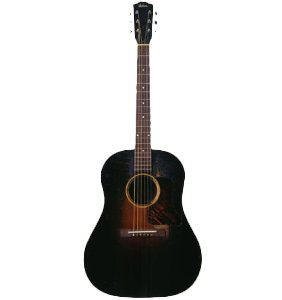 Gibson's 1934 catalogue describes the advantages of the Jumbo's larger body: "[It] produces a heavy, booming tone so popular with many players who do vocal or small combination accompaniment...[its] bass will amaze you, and of course the clear, brilliant treble is in perfect balance." 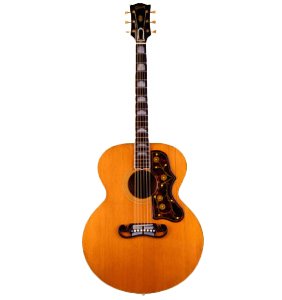 Among the SJ-200's many striking features are its elaborate bridge, with four rectangular pearl inlays above and below the string-pins, its 'crest' fingerboard markers, and the beautiful hand-carved pickguard.