Gibson launched its first full-production electric guitar, the EH-150, in January 1936. The 'EH' prefix stood for 'Electric Hawaiian', and it was designed to be played horizontally on the lap. A few months later, the company announced an archtop 'Electric Spanish' (the term 'Spanish' identifies an instrument for standard, in-the-arms use) with the same serial number: the ES-150. Both 150s featured a single-blade magnetic transducer, designed by Walter Fuller, that became known as the 'Charlie Christian' pickup when the great American jazzman (1916-1942) adopted the ES-150 a year later.

The new 'Electric Spanish' cost $77.50, and was less visually striking - and, at just over 16 inches, more modestly sized - than Gibson's top-of-the-range acoustic archtop, the Super 400. The bulky magnets for its pickup were hidden beneath its top, leaving only the polepiece, coil cover, and mounting screws exposed; the guitar 'plugged in' unobtrusively via a jack socket in the tailpiece. Aware that electric guitars were unfamiliar to many of its customers, Gibson felt it necessary to provide some basic information about the instrument's operation in its 1936 catalogue: "You hold it, tune it and play it just as you would any guitar...but strike the strings lightly and you have a tone that can be amplified to any volume you desire. Adjust the tone control and you change the tonal color from a rich bass to a brilliant treble."

Charlie Christian's high-profile use of the ES-150 with Benny Goodman's sextet and orchestra helped to ensure its popularity, and encouraged its take-up by other important artists, including Christian's friend and sometime duo partner T-Bone Walker (1910-1975). Gibson responded to its success by introducing a more finely decorated, 17-inch model, the ES-250, in 1939; this too was used and endorsed by Christian. Another new electric, the ES-300, appeared a year later.

The ES-150's spruce top is 16.25 inches (41.3cm) wide, and is X-braced, like those fitted to the guitars in Gibson's acoustic archtop range. Its back and sides are maple.

In 1940, star guitarist and tireless inventor Les Paul (1915-2009) built an experimental electric by placing a block of solid pinewood, fitted with two home-made pickups, between two halves of an old Epiphone archtop, and attaching a Gibson neck and fingerboard to the resultant 'sandwich.' Though bulky and far from elegant, it proved to have remarkable sustain, and was impervious to the acoustic feedback that dogged many hollow-body electrics. Les Paul named it 'The Log', and showed it to Gibson - but the company showed little interest in developing such an instrument until the early 1950s, when it sought Paul's advice on the design of a prototype carved-top solid intended to compete with Fender's Telecaster. The precise extent of his role in the new guitar's subsequent evolution is a matter of some debate, although he was certainly responsible for creating a trapeze-shaped bridge/tailpiece for it, and probably suggested other features and modifications. He also agreed to endorse the guitar, which was duly named the Gibson Les Paul, and went on sale in 1952, priced at $210. 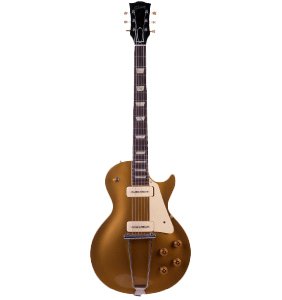 The 'gold-top' was the earliest type of Les Paul. Its two Gibson P-90 pickups are often nicknamed 'soapbars' because of their shape, and the trapeze-style bridge/tailpiece was designed by Les himself.

Unlike the Fender Telecaster and Stratocaster, the Les Paul underwent substantial changes to its hardware and electronics throughout the 1950s. Ironically, the first of these was the removal of the trapeze tailpiece that had been one of Les's principal contributions. In 1953, it was replaced with a simpler 'stud' or 'stop' bridge/tailpiece, attached directly to the top of the guitar. The following year, Gibson introduced its 'Tune-O-Matic' bridge, invented and patented by Gibson president Ted McCarty (1910-2001), and enabling individual string adjustment. This first appeared on a new Les Paul model, the all-black Custom, and was subsequently fitted to the original instrument (which was renamed the Les Paul Standard in 1958).

Gibson then introduced another pair of Les Pauls; in contrast to their predecessors, the Junior (1954) and Special (1955) had flat, uncarved tops, but retained the 'stop' bridge/tailpiece. The Junior had a single pickup, while the Special featured two. The next change involved the pickups for the two top-of-the-line models. Their P-90s, like all such transducers then available, had single coils that can be afflicted by buzzing, humming and other electrical interference. To minimise such noise, Gibson engineer Seth Lover (1910-1997) developed a guitar pickup with two adjacent coils whose polarities were reversed so that they would cancel out ('buck') unwanted signals, while producing a richer tone and more powerful output from the strings. In 1955, he submitted a patent application for his 'humbucking' twin-coil pickup (it was granted four years later), and from 1957 onwards, humbuckers were fitted to Standard and Custom Les Pauls. While some players still favour the single-coil P-90s, it is Seth Lover's humbuckers that are responsible for the distinctive 'Les Paul sound,' now familiar from countless rock and blues records.

The proliferation of Gibson Les Paul variants can be a considerable source of confusion. The Custom is the most expensive member of the family; the Standard (which evolved from the original 'Les Paul Model') is the regular instrument; the Special ranks below it in terms of price and features; while the Junior and TV are lower-cost models. 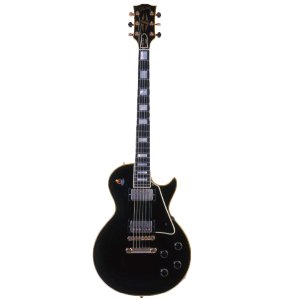 The Les Paul Custom is known as the 'Black Beauty', and also as the 'Fretless Wonder' - its fret wire is wider and flatter than that used on the original Les Paul. By the late 1950s, most Customs were being fitted with three humbucking pickups; this example has just two, but displays all the model's other regular features. 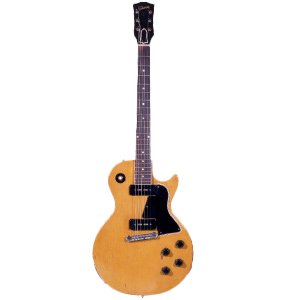 The model shown in our photograph boasts two black-covered 'soapbar' P-90 pickups, and a so-called 'TV' or 'limed mahogany' finish. Les Paul himself used a guitar with this colouring when making regular appearances on a 1950s television show - hence the 'TV' name 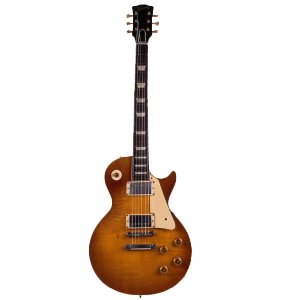 When the original Les Paul model was renamed the Les Paul Standard in 1958, its distinctive golden finish was replaced by the sunburst colouring seen here. The instrument's top is maple; its back and side are mahogany, and its fingerboard rosewood. 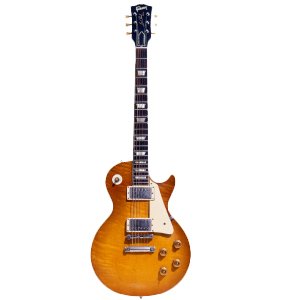 This Standard has the same finish as the previous 1958 guitar, but carries a Les Paul 'signature' on its headstock. The words 'rhythm' and 'treble' on the pickup selector are Gibson parlance for, respectively, the front (neck) and back (bridge) pickups. When the switch is in the middle position (as in the photograph), both transducers are in circuit.