In the late 1950s, Gibson decided to make fundamental alterations to its Les Paul guitars. The Junior and TV models were given double cutaways in 1958; the Special was similarly restyled a year later. All these instruments retained â€“ for now- the 1.75 inch (4.4cm) thickness of the originals, but in 1959, the double-cutaway Special and TV had their names changed to 'SG' (for 'solid guitar'). The other Les Pauls continued to carry the guitarist's endorsement, but his contract with Gibson was drawing to a close, and within a few years, the entire 'Les Paul' range would be reclassified as SGs.

The thick-bodied double cutaway design proved to be only an intermediate stage. In 1960, the Les Paul Standard was the first guitar to adopt what became known as the 'classic' SG look, with its much thinner profile and sharp-horned cutaways. The following year, this slimline shape was introduced on the Custom, Special, Junior, and TV, and the old, single-cutaway Les Paul body went into temporary retirement. However, the Standard, Custom and Junior were not officially renamed SGs until 1963.

SGs were intended to satisfy Gibson players who found the 1950s-style Les Pauls too heavy; but the earlier instruments' mass had been crucial to their distinctive sustain, and the thin-bodied SGs had a very different sound. Another significant change was the provision of a vibrato on some SG models. The earliest type, seen here on a 1961 Les Paul (SG) Standard, had a hinged arm that was pulled sideways; in 1963, it was replaced by a unit with a more conventional up-and-down action. SG pickup configurations corresponded to those on the Les Pauls; humbuckers were used for the Standard and Custom SGs, and single-coil P-90s on the Specials, Juniors and TVs.

Gibson's promotional literature was upbeat about the prospects for the new instruments: one advertisement claimed that they represented "an exciting new approach to the solid body guitar" that was "a solid success with players." In fact, SGs were initially fairly modest sellers, although they are now recognised as landmarks in electric guitar design, and have proved enduringly popular.

The company's range of solids included several more basic models aimed at beginners and players on tight budgets. In 1959, the Melody Maker made its debut: its single-pickup version, available in full or three-quarter sizes, cost only $99.50, while a twin-pickup variant (the Melody Maker D) sold for $135. In their original form, these guitars bore a close resemblance to the single-cutaway Les Paul Junior, but the example in our photograph dates from 1964 â€“ three years after the Melody Maker, too, acquired a double cutaway. In 1967, it was given an 'SG' shape, and three-pickup and 12-string configurations (the MM-3 and MM-12) were launched.

Also shown here is an SG Junior â€“ like the Melody Maker, a direct descendant of the Les Paul Junior, which had received an SG-style body in 1961, but kept its Les Paul name until 1963. The revamped Junior's electronics (one P-90 pickup fitted close to the bridge for a hard, punchy tone) remained essentially unchanged from its single-cutaway days. Its vibrato, previously an additional extra, became a standard feature in 1965, and the instrument remained in production until 1971. 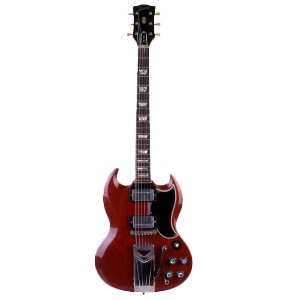 An early example of Gibson's first slimline SG, still bearing Les Paul's name on its headstock. It has a mahogany body, a rosewood fingerboard, and two humbucking pickups. The vibrato unit is the 'sideways-action' type described in the main text, and the bridge is a 'Tune-o-Matic.' 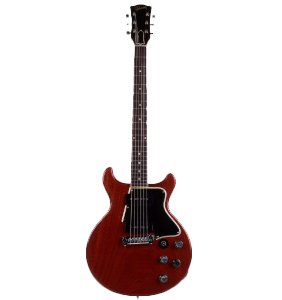 The first stage in Gibson's redesign of the Les Paul line was the introduction of this 'intermediate' body shape, featuring a double cutaway but retaining the same thickness as the original Les Pauls. The Special was available in this form for about two years from 1959; in 1961 it was given the thinner, contoured SG body with its sharp-horned cutaways. 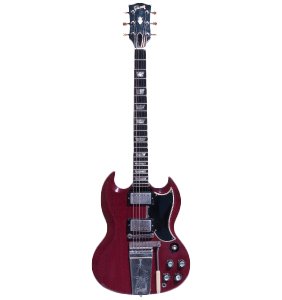 By the time this model was made, Les Paul and Gibson had ended their endorsement agreement, and his name had disappeared from the company's instruments. The vibrato here has an up-and-down action, but the pickups and overall construction closely resemble our 1961 Special's. 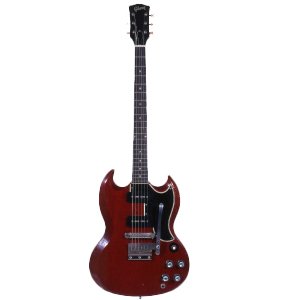 Like all SGs, the Special has an unbound mahogany body and neck. Its pickups are single-coil P-90s, not the humbuckers fitted to the more 'upmarket' instruments in the range. It is finished in cherry red; white was also available. 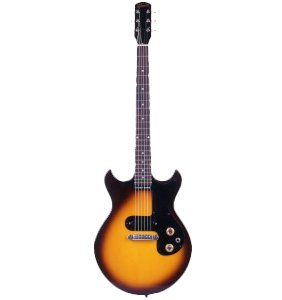 One of the most distinctive features of the Melody Maker is its narrow headstock. This does not appear on the Les Paul Junior from which it took so many other characteristics, but can be found on the Epiphone Olympic (see Epiphone section) - another Gibson-made solid, introduced in 1960. 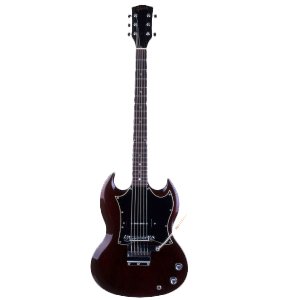 This SG Junior has a single P-90 pickup, surrounded by a black plastic pickguard â€“ a new design brought in during 1966. Its bridge (like those on the Melody Maker and the 1965 SG Special also shown here) has factory-set string compensation, rather than the fully adjustable intonation offered by Gibson's 'Tune-o-Matic.'