Gibson's earliest amplified archtops, such as the ES-150 (see previous photo), had essentially been acoustic guitars with pickups, rather than thoroughgoing electric designs. Their production was suspended during the war years, and after its resumption in 1946, it was decided to make the 150 (and its fellow 'Electric Spanish' instruments, the ES-125 and ES-300) from laminated wood instead of solid timbers, and to press their tops into shape, rather than carving them. There were several reasons for such apparently retrograde steps. Carving guitar tops was slow and labour-intensive; premium-quality tonewoods were scarcer and more expensive than they had been before the war; and Gibson's new owner, Chicago Musical Instruments (which had acquired the firm in 1944) was anxious to increase production levels. It was also generally accepted that solid woods were not essential for a good electric sound - a conclusion reflected in Gibson's use of laminates for the vast majority of its post-war amplified archtops.

Another departure from pre-war practice was the introduction of cutaways on some of these guitars, permitting easier access to the higher regions of their fingerboards. Gibson used two styles of cutaway: the rounded 'Venetian' type found on its first-ever electric cutaway model, the ES-350P, launched in 1947; and the sharper 'Florentine' shape used for another new instrument, the ES-175, which appeared two years later.

The 175 was modestly priced ($175), and fitted with a single pickup in the neck position (a twin-pickup version made its debut in 1953). Its deep body and warm, rich sound made it especially appealing to jazz players; Kenny Burrell was among the first major names to use it, and it has subsequently been the choice of Joe Pass, Herb Ellis, Pat Metheny, and many others. It has also attracted leading rock guitarists like Steve Howe of Yes, and Mark Knopfler of Dire Straits, and is regarded as one of the most successful and significant designs ever to come out of Kalamazoo. 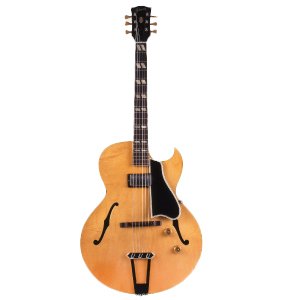 This guitar's 16-inch (40.6cm) top is made from laminated spruce; its back and sides are laminated maple, and the neck is mahogany. It has a humbucking pickup; earlier models featured a P-90 single-coil unit. The one-pickup version of the ES-175 was discontinued in 1972. 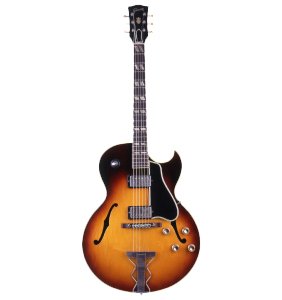 The 'D' suffix denotes a double-pickup instrument. In 1956, three years after its introduction, the 175D was given the distinctive T-shaped tailpiece seen here, with its zigzag metal tubing. 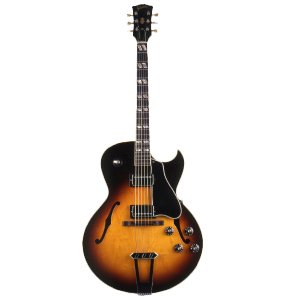 Unlike our 1961 model, this example has an original-style trapeze tailpiece, though it features the same sunburst finish as its cousin. The ES-175 is still being made, and is Gibson's best-selling archtop.

The ES-5, unveiled, like the ES-175, in 1949, was conceived as a "supreme electronic" version of the acoustic L-5, and boasted no fewer than three P-90 pickups. Its specification amounted to further evidence that Gibson now considered its amplified archtops to be out-and-out electric guitars. Placing a trio of bulky P-90s on the ES-5's laminated top had a seriously detrimental effect on its 'unplugged' tone, but provided a remarkable range of electric sounds. Gibson's publicity proclaimed its new model an "instrument of a thousand voices"; its neck pickup gave a warm, 'rhythm guitar' timbre, while the other two transducers were positioned to emphasise the mid-range and treble frequencies. Each of them had individual volume knobs, allowing their outputs to be used separately or in any combination, and an overall tone control was mounted on the instrument's upper right-hand bout.
Surprisingly, the original ES-5 had no selector switching; and many guitarists must have found its rotary volume 'pots' awkward to manage when quick changes of sound were required. Gibson's solution was to introduce a modified version of the instrument, appropriately named the 'Switchmaster', in 1955. This offered separate volume and tone controls for each pickup, plus a four-way lever selecting particular pickups, or all three at once.

1951 saw the launch of two Gibson Electric Spanish 'flagships', both of which (unlike most of the company's other post-war electric hollow-bodies) had carved, solid spruce tops. One was the Super 400 CES (the C stands for 'cutaway'), a twin-pickup version of the acoustic Super 400 with a $470 price-tag that made it the most expensive instrument in the company's catalogue. The first electric '400s' featured P-90 transducers, but in 1953, these were superseded by new 'Alnico V' units. Designed by Seth Lover, they offered a higher electrical output and greater sustain than their predecessors, and are fitted to the model in our photograph.

The other 1951 'flagship' was the L-5 CES. This guitar, based on the company's celebrated L-5 (see earlier), was a luxury electric hollowbody with a 17-inch (43.2cm) top, and maple back and sides. Its electronics evolved similarly to the Super 400 CES's: early versions had P-90 pickups, Alnico Vs were used from 1953, and from 1958, both the L-5 CES and Super 400 CES were equipped with Seth Lover's humbuckers. The L-5 CES is closely associated with famous jazzmen such as Wes Montgomery, Oscar Moore (guitarist with the Nat King Cole Trio), and Mundell Lowe.

The notion of producing amplified equivalents to its finest acoustic archtops was a logical and lucrative move on Gibson's part. But in 1952, it made a more surprising addition to its electric hollow-body range. This was the ES-295, whose all-gold finish, white pickup covers and distinctive bridge/tailpiece strongly resembled the company's new Les Paul solid (which made its debut the same year). The 295 also had the same sharp-edged 'Florentine' cutaway and 'double-parallelogram' fingerboard inlays as the ES-175. Sadly, it never enjoyed the latter's exceptional popularity, and no more were built after 1958.

The ES-5's top is 17 inches (43.2cm) wide, and made from laminated maple, as are its back and sides. Like most Gibson archtops of its period, it was available in a blonde 'natural' finish (as shown here), or in sunburst. 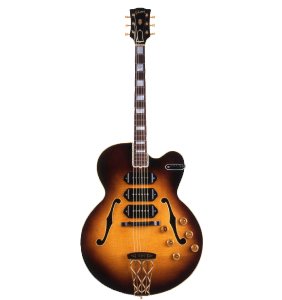 Apart from its four-way switch, fitted in place of the original ES-5's master tone control, the only significant difference between the Switchmaster and its predecessor is the newer instrument's more elaborate tailpiece. 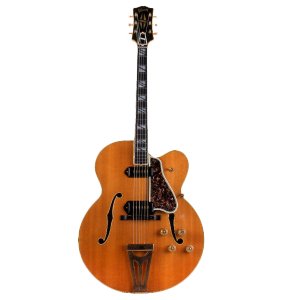 In the words of Gibson's own publicity, the Super 400 CES offered "the tonal quality of an acoustic guitar with the advantages of an electric instrument." This example has Alnico V pickups.

A later Super 400 with humbucking pickups and a 'Florentine' cutaway. It retains the original model's striking inlays, engraved tailpiece, and 'marbled' pickguard.

A cherry red L-5 CES: this colour, introduced in 1959, was only available to customers for two years.

Gibson's catalogue claimed that the ES-295 met "the demand for the slick action and sustaining power of a solid body electric in a regular-size acoustic guitar". The cream material on the pickguard and pickup covers is Royalite, a plastic developed by Dupont; the gold-inlaid design engraved on the pickguard is copied from an earlier Gibson lap-steel.