The approach to Billy Byrd and Hank Garland that led to the creation of Gibson's 'Byrdland' archtop was not an isolated occurrence. Guitar makers almost invariably had close links with their distinguished customers, and fully appreciated the value of an endorsement, or a 'signature' model, in boosting sales and generating publicity. As the inventor and premier manufacturer of the archtop instrument, Gibson had a special advantage in this area, and during the early 1960s, its President, Ted McCarty, capitalised on it by commissioning a series of 'Artist' hollowbodies bearing the names of leading performers.

One of the first of these was the Gibson 'Johnny Smith', launched in 1961. Smith (b.1922), a self-taught guitarist who was also a skilled trumpeter and arranger, had helped to define the 'cool jazz' movement with his 1952 album Moonlight in Vermont (also featuring tenor saxophonist Stan Getz), and was greatly admired as a player and bandleader. A meticulous man, he gave the company precise instructions about the design of the guitar that was to carry his name, insisting that its acoustic tone should not be compromised by fitting any pickups or controls directly onto the top. Instead, the Johnny Smith had a 'floating' humbucker mounted at the end of its fingerboard, and a volume control built into its pickguard. Gibson publicity described it as a "dynamically different instrument offer[ing]...rounded, balanced, resonant tones as well as brilliant sustain, fast action and easy handling." A double-pickup version followed two years later.

After the success of the Smith guitar and the Gibson 'Barney Kessel' archtop that appeared at the same time, McCarty introduced a third 'Artist' model in 1962. Developed in collaboration with virtuoso bebop player Tal Farlow (1921-1998), this was a 17-inch (43.2cm), two-pickup instrument with a Venetian cutaway inlaid to resemble a scroll; like the Johnny Smith and Barney Kessel, it featured a 'personalised' tailpiece displaying the endorsee's name. 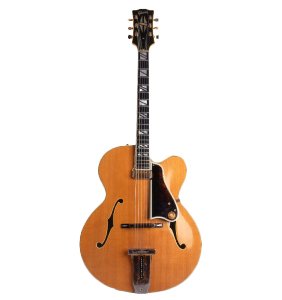 The Johnny Smith was designed as a true acoustic/electric, and its humbucking pickup and volume control have no contact with its solid, 17-inch (43.2cm) spruce top. The instrument's back, sides and neck are made from maple. Gibson continued to produce the guitar until the end of the 1980s. 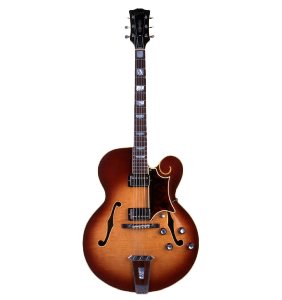 The 'D' suffix denotes a double-pickup instrument. In 1956, three years after its introduction, the 175D was given the distinctive T-shaped tailpiece seen here, with its zigzag metal tubing.

In 1957, Gibson's parent company, Chicago Musical Instruments, had taken over Epiphone (another major archtop manufacturer - see separate articles and descriptions of its guitars). CMI went on to use Epiphone as a lower-cost 'companion brand' to Gibson, and many Epi models were, to put it crudely, slightly downmarket copies of standard Gibson designs. However, on one occasion in the 1970s, this process was reversed when a fine Epiphone instrument, the Howard Roberts Custom semi-acoustic, developed in collaboration with the celebrated jazz player (1929-1992), was reintroduced as a Gibson! The rebranded guitar appeared in 1974, and five years later, a new Howard Roberts model, the Fusion, made its debut. The latter was a semi-solid design with a laminated maple body, 'Tune-O-Matic' bridge, and two humbucking pickups. Its distinctive 'six-finger' tailpiece (see photo) was added in 1990.

In the field of blues music, B.B. King (b.1925) is certainly the most famous long-term user of Gibson guitars. After favouring a Fender Telecaster during his early career, he switched to a Gibson ES-5, but since the 1960s he has been associated with the ES-355 - one of the family of semi-solids that began with the ES-335. King has owned a succession of these, giving them all the same nickname: 'Lucille.' In 1980, Gibson introduced a 'B.B. King' electric based on the 355, and since 1982, King has officially endorsed the model, which was later renamed 'B.B. King Lucille.' Unlike the original 355, the 'B.B. King' has no f-holes; its sealed top helps to avoid feedback at high sound levels. 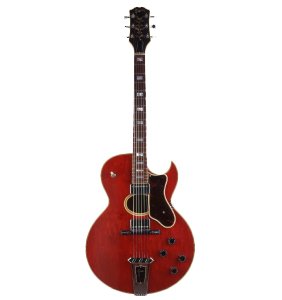 This version of the Howard Roberts Custom is in a wine red finish. The 'wandering vine' headstock decoration, a characteristic Epiphone feature, was 'borrowed' from the original 1964 Epi model. The instrument is 16 inches (40.6cm) wide; its second pickup, mounted near the bridge, has been added by its owner. 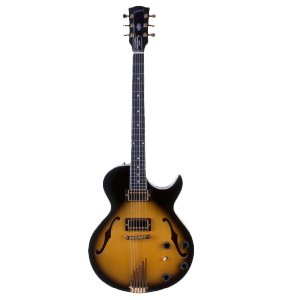 The Fusion has a number of unique features - including its unusually positioned volume and tone controls, its reshaped cutaway, and the distinctive tailpiece, which allows players to adjust the angles of individual strings via the six rotary controls at its base.

Unlike our 1961 model, this example has an original-style trapeze tailpiece, though it features the same sunburst finish as its cousin. The ES-175 is still being made, and is Gibson's best-selling archtop.