In the 1950s, Fender had shaken up the guitar-making establishment with its bold solid-body designs. Gibson had responded with the Les Paul, a highly effective instrument, but clearly the work of a maker with roots in traditional lutherie. For some critics, it was simply not radical enough - an accusation that could never have been used against the 'modernistic' guitars (as they were termed in Gibson publicity) that began to appear in 1958, and sported the wildest looks in the company's history.
All the 'modernistics' had bodies made from African korina wood, and the first of them was the Flying V, whose extraordinary shape derived from a tongue-in-cheek idea proposed by Gibson President Ted McCarty himself. A few were produced in 1958, but the V was soon discontinued, although it was to make frequent reappearances in the Gibson catalogue from the mid-1960s onwards. Its real fame came after its adoption by bluesman Albert King (1923-1992); later, it became a favourite with many hard rock and heavy metal players, notably Andy Powell of Wishbone Ash, and Billy Gibbons of Z.Z.Top.

The second 'modernistic' model, the Explorer, had an angular body shape with dramatically extended upper treble and lower bass bouts, and electronics identical to the Flying V's (two humbucking pickups with individual volume knobs and a shared tone control). Original examples of it are very rare, and no more than 40 1958-vintage Explorers are thought to have been built. The design then went out of production until the mid-1970s, when it was reissued in a mahogany-bodied version. There have also been Epiphone-branded Explorers, manufactured in the Far East.

The third guitar in the series, the Moderne, has a bizarre, confusing history. Its design was blueprinted and patented in 1958, but despite persistent rumours to the contrary, only a few 'demo' versions of it were made at that time. The instrument in our photograph is one of a limited edition of 500 Modernes issued by Gibson in 1982; an Epiphone Moderne appeared in 2001.

The best-known and most sought-after 'copies' of the three 'modernistics' were those produced by Ibanez in Japan during the mid-1970s. They closely resembled the Gibson originals, but, fr obvious reasons, had different names: the V-shaped Ibanez was called the 'Rocket Roll', the Explorer look-alike was the 'Destroyer', and the Moderne replica the 'Futura.' These Ibanez models are now highly collectible themselves! 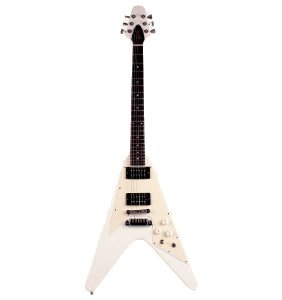 A reissue of Ted McCarty's striking design, which first appeared in 1958. Most later Flying Vs, like this one, are made from mahogany, not korina, and are fitted with conventional 'stop' tailpieces instead of the V-shaped metal plates found on the originals. 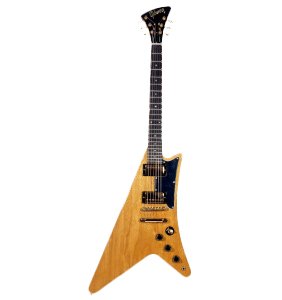 No authenticated 1958 Modernes have ever been discovered, although up to four prototypes of the design may have been constructed for a trade show in New York that year. This limited-edition replica was made using the original plans for the guitar; its body, like that of the first Flying Vs and Explorers, is made from korina wood.

Gibson's 'modernistic' guitars had proved too advanced for their time; but Ted McCarty continued his quest for a contemporary-looking solid-body model to provide serious competition for Fender. In the early 1960s, he decided to seek inspiration from a distinguished outsider: Ray Dietrich (1894-1980), the leading automobile designer famous for his work with Chrysler, Packard and Lincoln, who had no previous involvement with musical instruments. Dietrich was invited to submit sketches for a new-style guitar body, and his ideas were eventually realised as the Gibson Firebird.

The original Firebirds featured a reverse body shape, with the treble wing or 'horn' larger than the one on its opposite (bass) side, and a 'six-tuners-in-a-row' headstock oriented the 'wrong' way round. The tuning machines themselves were banjo-type units with their buttons facing downwards, not sideways. The new guitar had a 'neck-through-body' construction, and was made from mahogany; its pickups were mini-humbuckers previously designed for Gibson's Epiphone line by Seth Lover. Four Firebird instruments, available in basic sunburst, or, like their Fender competitors, in a range of custom colours, were launched in 1963. The model name was suggested by Ray Dietrich: a lover of wildlife, he also contributed the bird sketch visible on the pickguards of the guitars illustrated here.

The Firebirds were given Roman numerals (I, III, V and VII), and competitively priced - from $189.50 to $445 for a top-of-the-line Firebird VII like the one shown here. They certainly lived up to the claims of Gibson's publicity, which described them as "revolutionary in shape, sound and colors." However, they met the same resistance as the Flying V and Explorer, and also provoked a complaint from Fender, who claimed that their design infringed its patents. This was denied by Gibson, and no action was ever taken; but the dispute was probably a factor in Ted McCarty's decision, made during 1965, to modify the Firebirds' appearance and construction, and drop the reverse body shape. The line survived only four more years before being discontinued, but like other 'radical' Gibson solid-body models, Firebirds have grown in popularity since their initial appearance, and the company has produced numerous reissues and replicas of them in recent years. 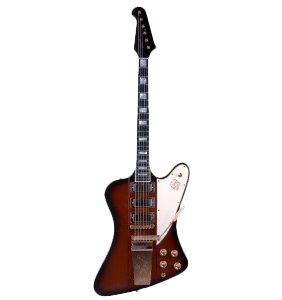 The three-pickup Firebird VII has a mahogany centre section, with the instrument's two wings glued onto either side. Other models in the 1963-65 range were fitted with single or paired pickups (all mini-humbuckers).

Not only is the body of this Gibson Firebird VII no longer reversed; its headstock is configured normally, and the neck-through-body construction has been abandoned.