The Firebirds were the last major Gibson electrics introduced by Ted McCarty, who left the company in 1966 after 16 years as its President. Three years later, the firm changed hands; its new owner was Norlin Industries, which derived its name from Maurice Berlin of CMI (Gibson's previous owners) and incoming purchaser Norton Stevens. The Norlin régime at Kalamazoo brought about some major changes in working practices, design, and marketing - focusing on high volume production in an increasingly competitive market, and transferring the construction of Epiphone instruments to the Far East, where manufacturing costs were much lower.

The late 1960s and 1970s also saw several additions to familiar Gibson lines. A few short-lived new SGs appeared, and after Les Paul renewed his endorsement deal with the company in 1967, there was a rash of new and reissued models bearing his name. Among them was the Les Paul Signature - a thinline archtop, launched in 1973, that bore little resemblance to regular solid-body Les Pauls, though its distinctive colouring was a nod towards the instrument's early 'gold-top' version. The Signature had the low impedance pickups favoured by Les for their clarity and superior frequency response. However, these are incompatible with normal high-impedance guitar amplifiers, and it was therefore necessary to provide the Signature with two audio outputs, supplying low- and high-impedance signals. The 'lo-Z' output was principally intended for recording.

A more conventional 'gold-top' Les Paul, the Deluxe, made its debut in 1969. While its finish and cream-coloured pickup mountings were reminiscent of its 1950s forbears, it lacked their rich, powerful sound, as it was equipped with Epiphone-style 'mini-humbuckers' rather than full-sized transducers. 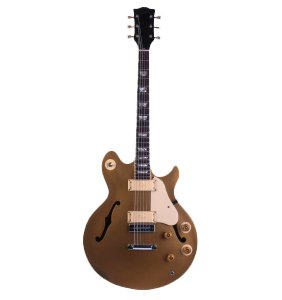 Despite its thinline, hollow-body design, the Signature retains a characteristic Les Paul cutaway on the right of the neck. It is 16 inches (40.6cm) wide, and among its unusual features are its two lower knobs: one a phase switch, the other a three-position 'level control'; Gibson publicity referred to this as a 'tone switch', and stated (somewhat confusingly) that "it allows you to tune your guitar to any amplifier for maximum flexibility and sound quality." The jack socket on the top is a standard, high impedance output; the low impedance connector is on the instrument's side. A matching Signature bass guitar was also produced. 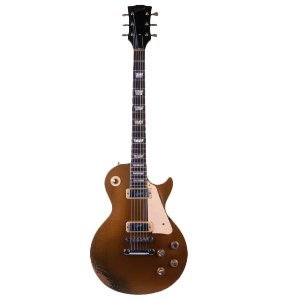 The Deluxe was available in red or blue 'sparkle', as well as in this distinctive gold finish, and in 'tobacco', 'walnut' and 'cherry'. Mini-humbuckers were probably chosen for it because they were already being produced in substantial quantities for Gibson's Epiphone electrics. The Deluxe remained in the catalogue until 1982.

The 1970s proved to be a confusing and increasingly troubled period for Gibson. Its guitars were never short of exposure: in fact, leading performers on both sides of the Atlantic were helping to make the Les Paul one of the dominant instruments of contemporary rock. Yet the models favoured by these players often dated from the 1950s, and more recent Les Pauls, despite the variety of styles they appeared in, were judged by some musicians as inferior to their predecessors in sound, feel, and appearance.

Many other Gibson solid-bodies were launched during the decade, but few seemed to catch on, or retain their place in the catalogue for very long. Meanwhile, at the lower end of the market, cheap and increasingly proficient Far Eastern copies of Gibson's classic designs (and of Fender's Telecasters and Stratocasters) were successfully circumventing the patent laws, and inflicting substantial damage on the original manufacturers' worldwide sales.

In 1974, Norlin, Gibson's parent company, moved the bulk of its electric guitar production from Kalamazoo, Michigan (the firm's base since its foundation) to a new plant in Nashville, Tennessee. Only acoustic and some top range semi-acoustic designs continued to be made at Kalamazoo. Ten years later, the original factory closed permanently, and all instrument manufacture transferred to Nashville. The idea behind these changes was to rationalise and reduce costs, but difficulties and poor sales continued, and in 1985, Gibson was put up for sale. Like CBS, which disposed of Fender during the same period, Norlin clearly felt it had no future in guitar building, and there were plenty of industry pundits and dealers who believed that Gibson itself might soon cease to exist.

However, the following year, Gibson was bought by a new management partnership headed by Henry Juszkiewicz (b.1953), who is currently its Chairman and CEO. His shrewd and capable direction has succeeded in re-establishing the company at the forefront of the musical instrument business, and its recent designs have displayed a fine blend of tradition and innovation. 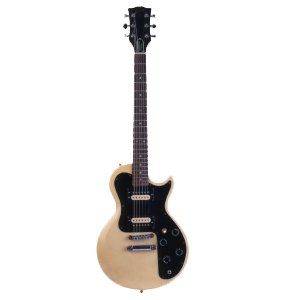 The Sonex line comprised three instruments, all with the same body shape, but offering a variety of pickup configurations and finishes. This is the most basic model, with two humbucking pickups and standard, passive circuitry. Its body is partly made from Resonwood, a fibreboard material similar to the Masonite used on Nathan Daniel's Danelectro guitars (see elsewhere). 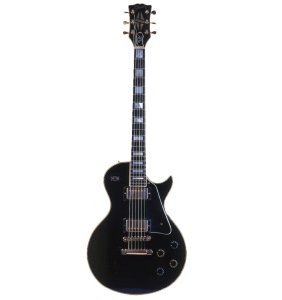 The Custom was one of the first Les Paul models to be reissued in 1968. The new version was fitted with only two humbucking pickups, but a third was frequently available as an option. This Custom is in the original ebony finish that earned the instrument its 'Black Beauty' nickname.

An example of Gibson lutherie soon after the firm's takeover by its new management. This model is an attractive reissue of a 1958-style Les Paul Standard, with a 'vintage sunburst' finish. It has a maple top and a mahogany body, and its trapeze-style fingerboard inlays closely match those of the original.

In the years immediately following their takeover, Henry Juszkiewicz and his team focused on producing Gibson classics, including SGs, Les Pauls, ES-335s, and other well-established instruments. There were also Custom and Historic ranges, and a small number of highly decorated Art Guitars - among them an Elvis Presley Super 400, and a special version of "Lucille," B.B. King's ES-355, made to celebrate the great bluesman's 70th birthday in 1995.

Gibson's Custom, Historic and Art Division continues to thrive: however, there have also been striking new designs - such as the Hawk series, launched in 1993 with the three-pickup Nighthawk model. Designed by J.T. Riboloff, then Gibson's Head of Research and Development, it offers a remarkably wide range of sounds, thanks largely to its coil-tap switch, which doubles as a tone control knob. Pulling it up converts the guitar's neck and bridge humbuckers to single-coil operation, producing a thinner, Stratocaster-like timbre that can be quickly changed back to a warmer, twin-coil tone as necessary. The Hawk family included various different versions of the Nighthawk, as well as the BluesHawk: the latter model appeared in 1995, and boasts two 'Blues 90' pickups (based on Gibson's classic P-90s), as well as a lightweight body with routed-out cavities beneath its f-holes. All Hawks have now been discontinued; the BluesHawk was the longest survivor, remaining in the catalogue until 2006.

Like previous bosses, Henry Juszkiewicz has fostered close relationships with the star musicians associated with his company's guitars. The great country performer Chet Atkins (1924-2001) first worked with Gibson in 1982 to produce his Standard CE (Classical Electric) - a nylon-strung instrument that can be played at high volume without the risk of acoustic feedback. At one time, Atkins and Juszkiewicz had houses on the same Nashville street, and in 1987, Gibson began manufacturing its own versions of the Chet Atkins Country Gentleman and Tennessean archtops, originally associated with Gretsch (see separate article and photos), as well as the SST, a steel-strung adaption of Atkins' CE.

Another celebrated Gibson user from a very different area of music is Led Zeppelin guitarist Jimmy Page (b.1944), a key figure behind the popularity of the Les Paul since the 1970s, and a virtuoso with precise and demanding requirements for his instruments. In 1995, he collaborated with the company to produce a Jimmy Page Signature Model Les Paul, based on his own customised 1959 LP Standard, and incorporating a number of special features. Gibson staffer Francis Johns explains that Page "wanted to try and achieve a guitar that felt like it had [already] been played and was 'broken in'. The neck is unique: it's actually thinner in the centre than it is at the top - Jimmy Page shaves his own guitars down to get this feel." Its electronics are also unusual: the two humbucking pickups were specially designed for the instrument (the bridge unit was the highest output transducer Gibson had ever made), and the control circuitry offers coil-tapping, and phase and series/parallel switching. Only 2,200 examples of the guitar were ever produced. 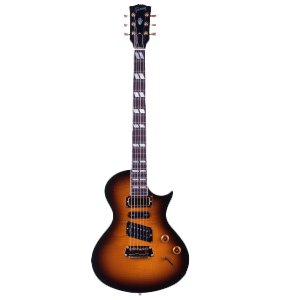 This sunburst-finish Nighthawk has a maple top and a poplar back. Its shape resembles the Les Paul's, but the newer model has a wider body and a longer scale length. There are Gibson M-series humbuckers at its neck and bridge positions, with a high-output NSX single-coil transducer mounted between them. Below the volume and tone/coil-tap control knobs is a Stratocaster-like, 5-position pickup selector lever.

The LPS shown here has a figured maple top, a mahogany back, a rosewood fingerboard, and all-gold hardware. Unlike some similar instruments, it features a fitted neck (rather than a bolt-on type) for improved rigidity and sustain. 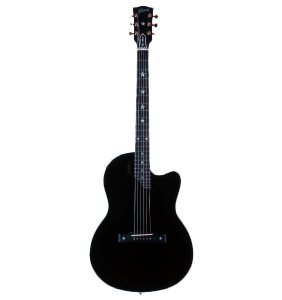 An 'acoustic solid-body' model with a transducer built into its bridge; its top is solid spruce, and its back mahogany. It has an active, battery-powered preamplifier, with volume, bass and treble controls installed on its left shoulder. 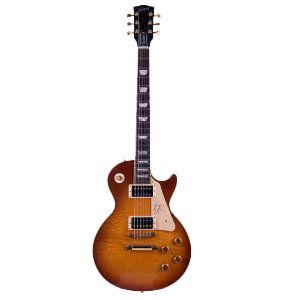 This special model has a bookmatched figured maple top, gold hardware, and an elegant 'light honeyburst' finish. Each of its four control knobs can be pulled up to obtain additional effects: the tone control for the 'rhythm' (neck) pickup switches the circuitry into series or parallel, while the other knobs offer coil tapping for each pickup, and put the two transducers in and out of phase with each other. Jimmy Page's signature graces the pickguard.