According to most accounts, the end of the great Amati tradition in Cremona was a rather abject one. The fourth generation of the great family is not treated kindly in published expertise, and Hieronymus II is compared very unfavourably with his forebears; his father Nicolas, his grandfather Hieronymus I, and his great-grandfather Andrea.

But maybe it is time for a reassessment. While it is true that Hieronymus did not thrive in Cremona as well as his predecessors, this may have as much to do with circumstance as with any perceived lack of ability. 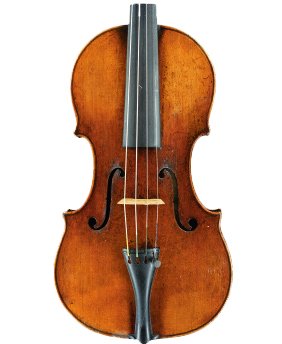 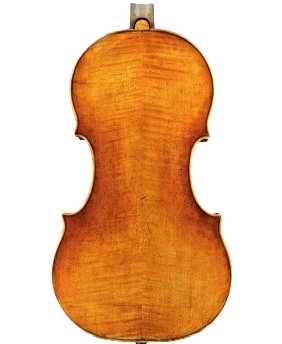 Hieronymus was almost as long-lived as his contemporarary and rival Antonio Stradivari, but not nearly as prolific, which tells us a great deal. He was born in 1649, on the 26th of February to be precise. He lived until 1740, dying just before his birthday at the age of 90. Rare for any man to live so long in those times, an extraordinary coincidence that two great violin makers in the same town should do so. Hieronymus was just five years younger than Stradivari, but outlived him by three years. This close parallel was perhaps the key thing in his life.

Nicolo Amati was already 53 when his son and heir was born. As is well known, he had earlier staffed his workshop with apprentices and assistants, breaking with the contemporary tradition out of necessity. The usual practice of course was to pass on the business to a son, but as none was forthcoming at a crucial stage, Nicolo took a practical step and employed Andrea Guarneri as the first of several helpers. By the time Hieronymus II reached apprenticeship age himself in the early 1660s, Nicolo may have been showing signs of fatigue, but nevertheless father and son worked closely together for some twenty years before Nicolo's death in 1684. Most experts see signs of Hieronymus' dominance in instruments made after 1670. But of course the crucial event was the emergence of Antonio Stradivari in 1666. While it is still not clear quite how he arrived at this position, it is obvious that by the time of Nicolo Amati's death, Stradivari was the single most innovative and talented luthier in the city, and all other efforts paled by comparison, possibly not just in terms of outright woodworking skills, but in ambition and business acumen. All the other workshops in Cremona dwindled and lost direction; Guarneri, Rugeri, and the greatest of all, Amati.

It is telling that even the most revered name in Cremona could not compete with Stradivari. Maybe Hieronymus II was guilty of some weakness of foresight or commitment, but the evidence of his skill and adaptability as a violin maker is ample, once you look for it. For any pair of hands to take over almost seamlessly from one of the greatest craftsmen in the city, his own father, tells something of Hieronymus' ability. Violins bearing the Amati workshop label between 1670 and 1680 are not perceptibly grossly inferior to earlier work. But the fierce innovation of Stradivari is the key. From 1680 to 1700 Stradivari experimented freely with the established forms and proportions of the violin, all previously determined by the makers of the Amati family exclusively. It must have seemed quite outrageous at the time. Yet he did so with consistency and intelligence, and unfaltering exactitude and craftsmanship. Hieronymus II, you might imagine, was left floundering, all the certitudes learnt from his father pulled away from under his feet.

His response though, is exciting. He learned from Stradivari. He did away with the excessively fluted edge that marks out his father's work, and adopted the lower, more powerful arching of his grandfather Andrea, all following Stradivari's initiative. He even took on deeper pigmentation in his varnish, again apparently in an effort to keep up with Stradivari. What results in Hieronymus' mature period are what many might think of as an ideal blend of the characteristics of Amati and Stradivari; the old, authentic 'grand pattern', with elegant rounded soundholes, combined with the more advanced archings of Stradivari, and a deep red varnish. To me, these show a surprising willingness to learn and develop, from the man who may have justifiably considered himself the rightful leader of the Cremonese violin making tradition in the eighteenth century. That he somehow fell short of Stradivari's Stakhanovian productivity pretty obviously triggered some sort of decline in Hieronymus' own work. Around 1700 he left Cremona entirely, possibly disillusioned with the competition for trade within the city, even from workshops spawned by his own father. Not only Stradivari, but Joseph Guarneri 'filius Andreae' and the Rugeri family provided rivalry that Nicolo Amati never had to contend with. He seems to have worked fitfully in Piacenza, and Antonio Zanotus of Mantua claimed to have been a pupil of his. Although not proven, this idea is perfectly possible. He did return to his native city in his later years, and very occasional instruments continue to appear, and these naturally have signs of weakness and failing powers. Thus did the Amati dynasty come to an end, having sustained itself over four remarkable generations, all of whom were responsible for the status and refinement of the violin as we know and cherish it. Hieronymus II and his uncle, Antonio, are the footnotes in most accounts of the family, but Hieronymus at least deserves more respect than he is often given.

He remains one of the rarest of the great Cremonese makers, at least on the count of his own labels. Much of his work was done under his father's name, and this includes a magnificent double bass recently attributed to him, which represents an outstanding and unique achievement, in itself a testament to his skill and energy. His hand is seen in several cellos, where his own distinct style is readily seen in the more open windings of the scroll, and also in violas, another relatively rare Cremonese instrument.

If he is to be judged as a failure, it is only by comparison with the very greatest geniuses of violin making, with both of whom he had the bad luck to share space and time. By any reasonable or fair measure, Hieronymus II Amati has every right to be considered a very fine and noble Cremonese luthier of the first rank, the true inheritor and upholder of the founding tradition of Italian violin making.