Jacob Stainer remains an enigmatic maker, despite the comparatively large amount of documentary evidence about his life that has been discovered. We know a great deal about his life and affairs, his clashes with the church and his eventual decline into what must have been some sort of depressive illness, but we still don't know how he came to make the instruments he did. 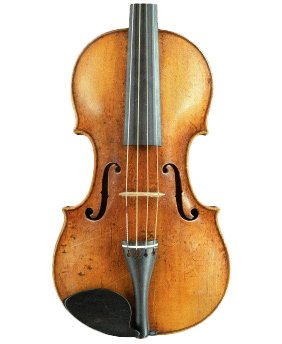 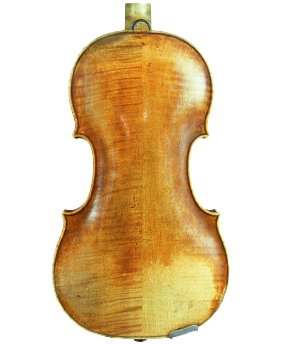 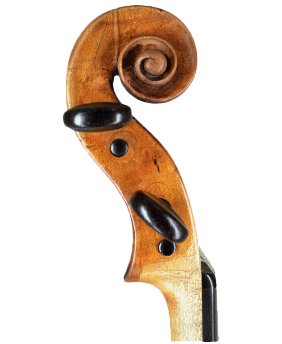 Stainer was born in about 1617 to a salt-miner father in the village of Absam, near Innsbruck, the village in which he lived for most of his life, and died in 1683. While the salt-mines were a major source of employment in the region, so too was the craft of instrument making, capitalising on the rich resources of mountain pine forests. Choosing the latter career, in 1633 Jacob seems to have started an apprenticeship locally, but it is not known with whom. By 1638, after only five years of training, he was working for himself in Absam, and the earliest authenticated date found in one of his violins is 1641. While there is plenty of evidence to support the idea that Stainer travelled widely, from Salzburg to Venice and even to Rome, there is really nothing to show that his very finely crafted and proportionally elegant instruments were any more than superficially influenced by any of the contemporary Italian masters who he was to outstrip in popularity in the eighteenth century. The main evidence for his having studied with Nicolo Amati is a printed label found attached to the top block of a violin of the early period stating 'Jacob Stainerâ€¦ fecit Cremona 16..'. The problem is that there is no room chronologically for such an apprenticeship. It has been established from the Absam records that Stainer was working in his own right by 1638. Nicolo Amati only began taking on apprentices himself in 1641, with Andrea Guarneri as his first assistant. There are no other violin makers known at this time who would have had the skill and experience to pass onto Stainer anything, it would seem, that could have contributed materially to the ability and knowledge that he had already acquired by this time, and the only source he had was his first, anonymous master and his own creative genius. It is interesting to note that as early as 1627, apprentices in Toledo were routinely asked in their final qualification to practice as instrument makers, to draw patterns for the violin, using only compasses, ruler and set square. The general rules of proportion for violin design were well and widely established by this time, sufficient for Stainer to develop his own distinctive style.

Stainer's violins are indeed the only ones in this period or even for generations afterward to stand comparison with the masterpieces of Cremona, and for much of the eighteenth century and particularly in the Germanic regions of Europe they were regarded as superior. Stainer was by any reasonable interpretation of the known facts an original thinker, an independent and proud spirit. His inscription 'In manu propria' (by his own hand) added to later labels emphasises his desire to be recognised as the only individual responsible for their creation, unlike other 'cottage industry' instruments, or those made by apprentices for or on behalf of their masters. As far as we can tell, he never had any outside help at all- not even a son or daughter to help in the workshop, as most of his children seem to have died in infancy. The intriguing and enigmatic aspect of his work is how close it comes in so many respects to Cremonese contemporaries, yet how different and distinctive it is. Most luthiers working in the early period either chose to copy the Cremonese as closely as possible, often with results closer to caricature than respect, or to follow more bizarre and differentiated paths.

Stainer's work stands comparison with the Cremonese in terms of the very high level of craftsmanship and finish, the fine materials and varnish, and the acutely developed sense of proportion and geometrical homogeneity, and above all, their unfailing consistency, derived from a system of working with a mould, like the Cremonese. The differences come mainly in the acoustic workings- the sound-forming aspects of the arching and graduation of the plates. In these areas, Stainer was original in his thinking, and produced violins with a tone that defined the aesthetic of the 'baroque' period. His instruments are made with a full arching, not measurably different from many Amati instruments, but the shaping is slightly squarer in cross section, with a steep decline towards the edges, which are marked by a deeply sunk trench. This makes the edges of the plates thinner, and the tonal response very different. The typical description of the Stainer sound was silvery, or sweet, but with more than enough penetration to carry in the halls and chambers of palaces and churches.

The construction is fascinating; the interior shows all the signs of an internal mould being used, but Stainer adopted a curious method of marking points along the centre line of the back, usually five evenly spaced puncture marks, which owes something to the Amati's technique of drilling a small hole in the centre of the plate, not quite piercing the external surface. Speculation that this is connected with the hollowing and graduation of the back in both instances makes considerable sense. Stainer however sealed the centre joint with a long strip of parchment, which usually covers these intriguing marks. He also routinely used hardwood for the linings, identified usually as walnut, but sometimes willow or fruitwood, which are morticed into the small pine corner blocks. The upper and lower blocks are also of split pine and deeply rounded, with generally only a single nail used to secure the neck, rather than the cluster of three or four found in Cremonese instruments. Stainer apparently did not use the small locating pins observed in all Cremonese work, worked through the back into the upper and lower blocks, but they are present in the table, hidden by the fingerboard and tailpiece.

Stainer also departed from the Italians in using maple for his purfling, and in the distinctive cutting of the soundholes. Their snaking form with long, curving upper and lower wings is original, as is the style of cutting, with all the edges precisely upright, at right angles to the plane of the ribs. Cremonese makers held the knife on the radius of the curve of the arch, so that the edges of the F appear to slope inward. In Stainer's work, even the circular finials are cut vertically, which produces a distinct impressing of ovality when viewed head-on, as the hole is poised on a steeply falling slope of the arch.

Stainer's scrolls are also original- beautifully cut and finely symmetrical, they have a tightly wound spiral with a tendency for the last turn to curl up around the eye. The pegbox has a slight swan-neck form, which can be seen even in those instruments where he substituted a finely-carved lion's head (complete with a neatly inserted, separately carved tongue). Fantastical heads are frequently found in non-Italian work of the seventeenth century, but none approach the quality of Stainer's lions.

The other innovation usually credited to Stainer is the use of 'bird's-eye' maple, showing a distinctive figure of small whorls, reminiscent of bird's eyes, rather than the regular long flame of the Dalmatian maple used in Italy. There is evidence to suggest that this timber was imported from America in this period, available from merchants in Hamburg as a premium-quality material, and is not a native European stock. It certainly rarely appears in Italian work, and then only in instruments which are obviously modelled on Stainer's instruments.

The list of Stainer's idiosyncracies helps to differentiate him from the very standardised and consistent Cremonese work of the period, and provided Germanic makers with a fine model to follow throughout the eighteenth century. The Klotz family of Mittenwald in particular exploited the style to the full, but elsewhere it led to sad caricatures of the fine work of the master himself, and eventually to his decline as a major influence on other makers. His high-arched, sweet sound was eventually supplanted by the powerful tone of the flat arched Stradivari model, but is now valued again for authentic performance of baroque music. Throughout Europe Stainer was recognised as the supreme violin-maker; as late as 1832 the French 'Encyclopedie Methodique' persisted in the opinion that 'the violins with the greatest reputation are those of Jacob Stainer', but by that time the leading Parisian luthiers had gone over entirely to the Stradivari model, which remains the definitive pattern for modern performance.