Nashville-based luthier Jerry Jones is dedicated to recreating the classic Danelectro, Silvertone, and Coral electric guitar designs of Nathan Daniel (see Danelectro article and photos). Jerry was born in Jackson, Mississippi, and has been making guitars in Music City since the early 1980s. He started out by producing a line of self-designed custom models, but a visit from a customer with a damaged Silvertone led to a change in direction. Jerry had always been interested in Daniel's instruments, and as he explains, "This was the first time I ever really got to have one in my shop for repairs. I sat down and thought, 'This is more like the kind of guitar that I would build for myself - rather than one of the custom guitars I was building for other people.' So I [decided] I'd just make myself one." Jerry started work on his prototype instrument (shown here) in 1984, but put it aside when another client commissioned a Danelectro-style Longhorn six-string bass from him - an event which, in Jerry's words, "opened up the opportunity to make a whole line of [Daniel-inspired] guitars." The prototype remains unfinished, but is still used regularly for testing pickups.

Like Daniel, Jerry makes his guitar tops and backs from Masonite (hardboard), and covers their sides with a plastic material. However, he has replaced their V-shaped truss rods with a more modern, adjustable design, and constructs their necks out of maple, not poplar. He also uses CNC (computer numeric control) systems to carve out bodies and necks - this ensures consistency, as well as speeding up and boosting production.

Jerry relishes the simplicity and unpretentiousness of Nathan Daniel's instruments, and remembers their creator with admiration. In 1991, he visited Daniel in Hawaii, and recalls the fascination of "being able to sit down and talk to him about all this stuff - it was just incredible." He is uncertain about the origins of the Danelectro's distinctive shape, but comments that "if that design had been drawn out on a napkin in some diner back in the 1950s, I'd love to have that napkin!" 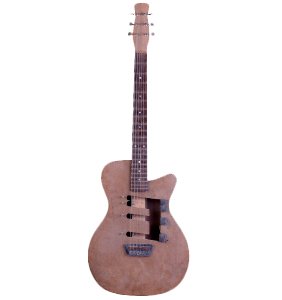 This unfinished instrument was Jerry's first attempt at a Danelectro-style guitar. A solid block of wood runs down the centre of its body to the bridge, which is supported by another block (the two pieces of wood combine in an inverted 'T'), and the guitar's side sections are hollow.

In 1956, Nathan Daniel was the first-ever luthier to produce a six-string bass (tuned an octave lower than a standard guitar); two years later, he introduced the double-cutaway 'Longhorn' body. Like Daniel, Jerry Jones manufactures six- and four-string Longhorn basses. He also makes the Guitarlin (a six-string with a Longhorn shape, described in his catalogue as "combin[ing] elements of both standard guitar and mandolin," and has developed a Longhorn guitar/bass double-neck. 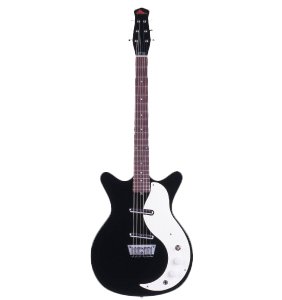 A more conventional double-cutaway design, available in two- or three-pickup versions. Its attractively shaped white pickguard is modelled on the ones fitted to the 1950s and 60s Silvertones produced by Nathan Daniel for Sears. As Jerry Jones' catalogue puts it, "they don't make 'em like they used to - so we do!" 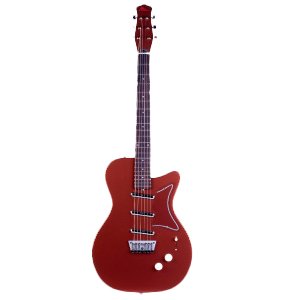 A single-cutaway electric with three 'lipstick-tube' pickups; twelve-string and baritone models are available with the same body shape. The top and back are Masonite, and the internal centre and bridge blocks are poplar. The headstocks on Jerry Jones guitars retain the classic 'Coke-bottle' shape of the Danelectro originals, but carry his own 'red triangle' trademark.

This is Jerry Jones' version of an instrument originally created by Nathan Daniel for top session musician Vinnie Bell (see Danelectro article). It has three pickups: two for the six main strings, and a separate one for the thirteen drones on the upper bout, which are tuned in semitones. The extended, curved bridge is designed to enhance the 'sitar-like' tone quality by buzzing slightly!