This is a rare and fascinating instrument. The name is unrecorded previously, although Henley cites a label of 'Chiaravalle di Faleri', which was unconfirmed at the time of writing of the 'Brompton's Book of Violin and Bow Makers'. The discovery of this example, with a clear and original label which states that the maker was a pupil of Postacchini is of great interest, and sheds further light on the career of Andrea Postacchini, a luthier of considerable substance and value in these times. 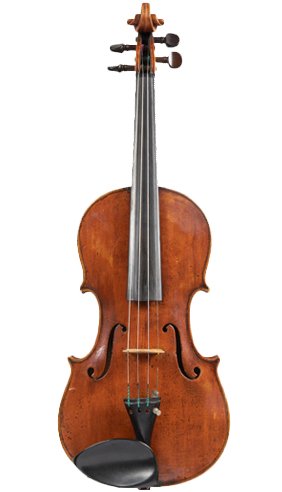 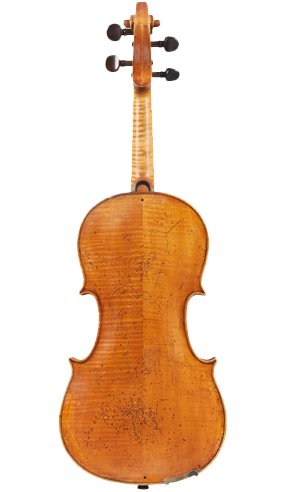 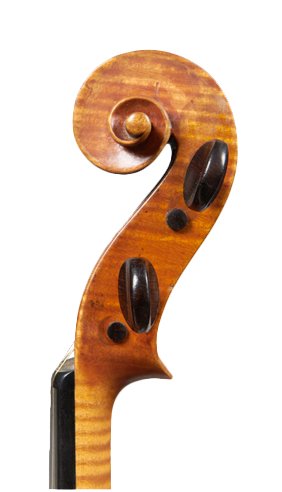 In appearance, the instrument is almost a caricature of a Giuseppe Ceruti. The impression immediately given is of a maker who is an accomplished craftsman, but not an experienced luthier, working to a supplied pattern. It is neatly finished, the long-cornered outline certainly of Ceruti origin, as are the large ebony pins in the upper and lower back. The soundholes are similarly taken from the Ceruti model, with the same wide swing. The purfling is neatly done, but quite slender and faded in colour. What betrays the hand of the inexperienced violin maker is the arching, which is totally unlike that of either of his two obvious influences, Ceruti and Postacchini. It is low, but very full, almost bulbous at the edges and particularly so through the lower wings of the soundholes, giving the impression of a ‘reverse flute’ or a crown where normally the hollow edge flute would pass smoothly through the lower circle and wing.
The scroll is a splendid mixture of the Postacchini and Ceruti model; beautifully poised on a Cremonese form, with the delicate eye and slightly biased volute of Postacchini, lacking the last full turn. The pegbox is deep and strong, the sides worked determinedly flat, with no chamfer on the upper edge and the pegbox worked right to the limit of the throat. The chin dips awkwardly beneath the G peg, losing the flowing line of the back of the pegbox. This all, again, seems to me to indicate the work of a skilled cabinet maker not well acquainted with the traditions of lutherie. Since there is no other reliably authenticated work to compare, it may be assumed that Faleroni was not productive, but what he did produce was closely influenced by two significant Italian makers of the time.
This is significant given the paucity of information about Postacchini’s training. Hitherto, there has been to my knowledge, only unproven speculation about a link between himself and Ceruti. This violin, with strong physical evidence of both makers, would seem to give useful support to that notion. The label clearly states ‘’ex disciplina Postacchini’, but is unfortunately undated. Henley’s unattributed label provides ‘Toscano 1819’ which seems surprisingly early. Andrea Postacchini himself was born in 1786 in Fermo, the son of Amico, who may or may not have also been a maker. He garnered the soubriquet ‘the Stradivari of the Marches’, but appears to have been largely self-taught, and certainly stylistically very individual. He was an almost exact contemporary of Giuseppe Ceruti, who was born in 1785 in Sesto Cremonese, dying in Mantua in 1860, only two years before Postacchini. Giuseppe Cerutis’s work is itself very rare, overshadowed by that of his father Giovanni Battista, and only appears from about 1813. Postacchini, in contrast, was prolific, although his career as a luthier began only after initial training in a seminary to become a priest. Faleroni is his only known pupil other than Postacchinin’s son Raphael, who gave up the craft professionally to follow his father’s original vocation in the priest hood. Although there is so far no clearly established point of contact between Postacchini and Ceruti, the work of this rare maker, Faleroni, shows such clear evidence of the influence of both men, that it at least gives some sort of substance to their supposed affiliation.