Californian luthier Steve Klein's electric guitars look strikingly unconventional, but their appearance is far from being a visual gimmick. His headless instruments are designed to provide optimum balance and ease of playing, and have been favoured by a long list of famous musicians, including Bill Frisell, Andy Summers of The Police, Henry Kaiser, Ken Wessel (former guitarist with Ornette Coleman), and Lou Reed.

Klein is also a celebrated acoustic guitar maker (see separate article), and the bodies of his BF-96 and DT-96 electrics, illustrated here, are shaped to support the player's right (or picking) arm in the same way as the upper bout of an acoustic does. The guitars are neither neck- nor body-heavy, and don't constrict the performer's arm movements by having to be held in position. Their design also benefits the left (or fretting) arm, which is given easier access to the higher reaches of the neck by the gently sloping body shape that replaces a conventional cutaway.

In 1995, the running of Klein's electric division was taken over by Steve Klein's colleague Lorenzo German, who, with his small staff, built the BF-96 and DT-96 in our photographs. However, the third guitar on this webpage - an earlier, custom model known as 'The Bird,' offers a sharp contrast to the ergonomic perfection of Klein's more recent designs. Described by Lorenzo German as "the anti-Klein guitar," it is heavy, less comfortable to play, but, as he says, "an amazing art-piece." 'The Bird' was commissioned by W.G. 'Snuffy' Walden, who had met Steve Klein in Colorado, but left for England with his rock band, the Stray Dogs, before the instrument was completed. The two men subsequently lost touch; but Walden went on to become a leading LA-based musical director, composing music for major TV shows such as Roseanne, Thirtysomething, and (most famously) The West Wing. He had still not taken delivery of his guitar at the time we photographed it! 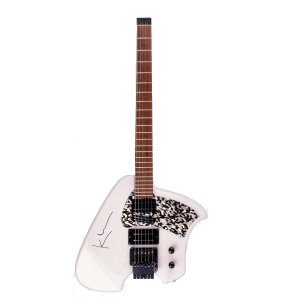 The BF- and DT-96 shown here have identical electronics - two Seymour Duncan humbuckers in the neck and bridge positions, and a Seymour Duncan single-coil transducer in the middle - but different woods are used for their bodies. The BF-96 is made from swamp ash, a tree that remains immersed in water for several months of the year. Timber for the instrument's body is taken from the lowest, most waterlogged part of the trunk, and the BF-96 is consequently heavier than its alder or basswood DT counterpart. It is also produced in a slightly lighter version with hollowed-out internal cavities. 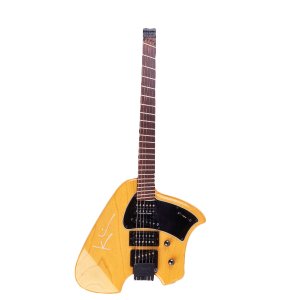 Basswood or alder is used on the DT-96. This basswood example also features the Novax 'Fanned Fret Fingerboard System,' patented by luthier Ralph Novak in 1989. Its fret positions 'fan out' from the 12th fret in order to provide better overall intonation than is possible with standard horizontal frets. Novax fretting is an option on all Klein electrics. 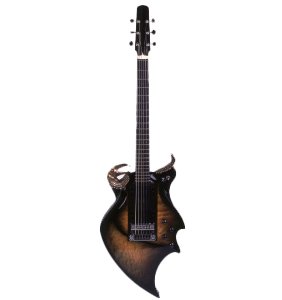 This guitar has a highly unusual shape, though Steve Klein comments that "it's patterned after a [Gibson] Les Paul, believe it or not!" The metal decorations are solid bronze, adding considerably to the instrument's weight, and its original strap (not seen here) was fashioned from a camel harness! The modular pickup and bridge units can easily be removed or replaced. 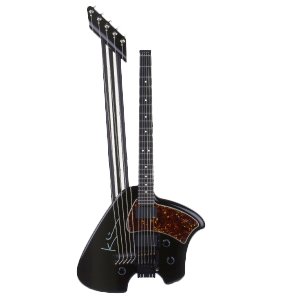 This hybrid's basic body design is similar to the one found on Steve Klein's six-string electrics, but there is a second headstock and three supporting bars for its five additional strings. These have their own pickup (controlled by the volume knob beneath the five-string bridge); the 'regular' guitar section is fitted with two EMG humbuckers.