Christian Friedrich Martin (1796-1873) was born at Markneukirchen, Saxony, in the southeastern corner of modern Germany, on January 31st 1796. He took an early interest in woodworking, learning its basics from his father, Johann Georg Martin, a cabinetmaker who also built guitars. However, Christian Friedrich's hopes of gaining an apprenticeship as a stringed instrument maker in or near his home town came to nothing, and as a teenager, he moved to Vienna, where he was employed by one of the city's leading luthiers, Johann Georg Stauffer (1778-1853), as an apprentice and later as workshop foreman.

Martin remained with Stauffer until 1825, then returned to Markneukirchen, where he intended to set up a company of his own. He encountered opposition from Saxony's powerful guild of violinmakers, many of whom constructed and sold guitars as well, and after a bruising series of legal battles with them, the young man decided to abandon his native land and seek his fortune in the New World. In 1833, he emigrated to America with his wife and son, and established a music store in New York City that stocked a wide range of instruments and sheet music alongside his guitars. These early Martins were probably built using materials their creator had brought with him from Germany; no purchases of lutherie supplies are recorded in the shop's accounts until 1835.

In 1839, Martin relocated to Nazareth, Pennsylvania, a little town some 90 miles west of New York City with a sizeable German-speaking community. He opened a guitar-making factory there in 1859, but Martins continued to carry a 'New York' label until 1898, when the firm ended its links with its NYC-based distributors, assumed full responsibility for selling its own instruments, and began identifying 'Nazareth, PA' as its headquarters on its stamps and marks. By then, C.F. Martin & Co. was being run by the founder's grandson, and it has remained in the hands of his descendents (and retained its base in Nazareth) ever since. Its present Chairman, Chris Martin IV (b.1955), is Christian Friedrich Martin's great-great-great-grandson.

Martin has played a central role in the evolution of the American-style flat-top acoustic guitar - although the company's earliest instruments, with their scrolled headstocks and often elaborate decorations, were strongly influenced by European tradition, and especially by C.F. Martin I's mentor, Stauffer. Soon after the move to Pennsylvania, Martins took on a simpler appearance, and acquired their now familiar rectangular headstock, with three tuning machines on each side. In the 1850s, the firm adopted a system of naming its models with a prefix denoting body size and a suffix specifying 'style' and materials (see below for examples), and has used it ever since. The mid-19th century also saw the introduction of X-braces on the undersides of Martin guitar tops; previous Martins had featured lateral strutting.

Though originally developed for gut-strung guitars, X-bracing was an essential factor in the outstanding sound of Martin's steel-strung flat-tops. Wire strings, providing a brighter, more cutting tone than those made from gut, were available as an option on some of its guitars from 1900 onwards. They met with disapproval from classical players, but steady demand from the popular music sector led to their being fitted as standard to a growing number of models during the 1920s. The quest for greater onstage volume, as unamplified guitarists struggled to make themselves heard in large auditoria, also led to an increase in Martins' body width: in 1902, the company introduced its '000' size, whose lower bout measured 15 inches (38.1cm) - 7/8" wider than the next-largest Martin body size, the '00'. The 000 later became the starting-point for the company's influential 'Orchestra Model' (OM). This was inspired by Perry Bechtel (1902-1982), a star banjoist planning to take up the guitar, who approached Martin in summer 1929 with a request for a flat-top with improved access to the higher reaches of the fingerboard (14 frets clear of the body, rather than 12 - the norm for classical guitars) and a slightly narrower neck than usual. Martin responded by making Bechtel a customised 000-28 matching his requirements, and subsequently named the modified instrument the OM: it was soon being advertised as available €œin six styles priced from $30 to $175." 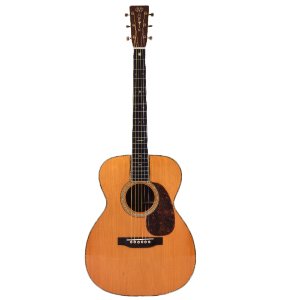 The OM itself was discontinued in 1933, though production of it resumed in the 1970s; but 14-fret necks went on to be adopted by the company and its competitors for most steel-strung flat-tops. Another significant innovation, the 'Dreadnought' (D) size guitar body, derived from a design the firm had first produced in 1916 for Oliver Ditson, a major Boston-based retailer, but was renamed and relaunched by Martin in 1931. Its 15 5/8" (39.7 cm) width proved popular with players seeking extra power and bass response, and Dreadnoughts were extensively imitated by other manufacturers. 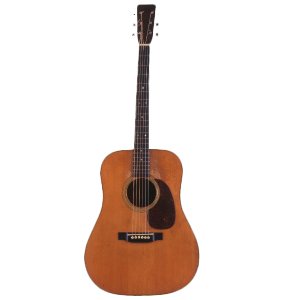 Martin's reputation rests on its flat-top guitars; and while preserving its traditions and maintaining high standards of craftsmanship, the present-day company also offers its customers instruments with more contemporary touches, including sophisticated pickup systems and - since 1981 - cutaways. It has never enjoyed the same levels of success or acclaim with other guitar types. Martin arch-top acoustics were first produced in round-hole and F-hole versions during the 1930s, but discontinued after 1941; and a range of solid-body electrics, whose headstocks carried the initials 'CFM' rather than the full Martin name, appeared in 1972 but remained in the catalogue for only four years: earlier forays into arch-top and flat-top electrics were similarly short-lived. Martin mandolins, first made in the 1890s, are also things of the past, like its tiples, harp-guitars and zithers - although the firm still produces its highly regarded ukuleles, originally introduced in 1916 during the Hawaiian music boom that followed San Francisco's 1915 Panama-Pacific International Exposition. More recently, its 'Backpacker' guitars, made under licence in Mexico in steel- and nylon-strung versions, have proved popular with guitarists seeking conveniently portable, robust instruments.