Rick Turner's 'Pretzel' and Model 1 Guitars Rick Turner, one of America's most creative and respected luthiers, designs and builds his guitars in the Monterey Bay-side city of Santa Cruz. He came to California in 1968, having previously worked as a musician and instrument repairer on the East Coast - where he played guitar in Boston coffee houses, and backed the Canadian folk duo Ian and Sylvia. Rick subsequently joined a New York-based rock band, and continued his career as a guitarist and bassist after moving west; but by 1969, he had decided that his future lay in guitar making.

Rick built his earliest electrics, including the 'Pretzel' shown here, entirely by hand. Their design was tailored to what could be achieved with a minimum of tooling; as he explains, the 'Pretzel' "was the first instrument where I ran the neck all the way through the body, and added wings onto the side. It was an easy way to attach the neck, and ideally suited to hand building. I think the only electric tool I had at that time was maybe an electric drill." During this period, Rick Turner became one of a group of talented engineers and craftspeople associated with the Grateful Dead, perhaps the greatest-ever rock band to emerge from San Francisco. This team eventually coalesced into Alembic, Inc. (see separate article), which Rick co-founded. After taking a key role in the design of Alembic's early instruments, he left the firm in 1978 to start his own guitar-making business.

Rick's first post-Alembic guitar, the Model 1, caught the attention of Fleetwood Mac's Lindsey Buckingham while it was still on the drawing board. Buckingham ordered one of the new instruments, and Rick delivered an early prototype to him in 1979, during Fleetwood Mac's rehearsals for their Tusk tour. He recalls that "after [Lindsey] had been playing the guitar for about two hours, he yelled to his guitar tech, 'You can leave the Strats and the Les Pauls and the Ovations at home - this is all I need!'" Buckingham has used the Model 1 ever since, and it has been featured on many Fleetwood Mac videos and recordings. 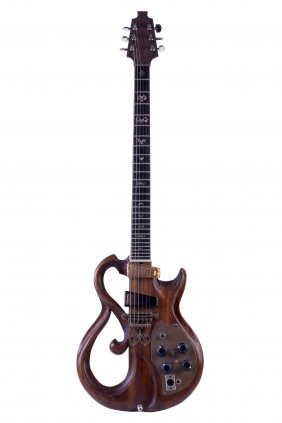 This hand-made guitar, with a carved-out body shape that inspired its name, shares some of the characteristics of early Alembic instruments (see Alembic article and photos). Like them, the 'Pretzel' has a neck-through-body construction - an alternative to attaching the neck to the body with bolts or glue. 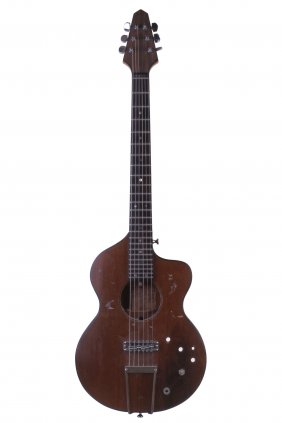 This is the first of three prototypes of the Model 1; the second example was sold to Lindsey Buckingham (see main text), and the third was given to Rick's then-brother-in-law. Despite its appearance, the Model 1 has a solid body, with a 2.5 inch/6.4cm-thick centre section (visible through the 'sound-hole') made from pieces of mahogany left over from the construction of Alembic guitar and bass bodies.

The original Model 1 went out of production in 1981, but Rick started making it again in 1990. He describes the instrument as an attempt to combine a Fender-style neck with a Les Paul-style body, in order to create a sound giving "the warmth of a Les Paul, but with a bit more definition." The Model 1 has a Honduras mahogany body and a laminate maple/purple-heart neck. The rotating pickup fitted in the 'sound-hole' can be complemented by a range of other transducer and electronics options. Rick Turner's 'Renaissance' and 'model T' Guitars

As a luthier, Rick Turner is especially interested in what he calls "the big fuzzy grey area between pure acoustic and pure electric. That's where most of what I do is done." Good 'acoustic' sound is notoriously hard to obtain from amplified instruments (especially in noisy, unpredictable onstage settings), and even the finest acoustic guitars will give disappointing results when used with unsuitable added-on pickups. Rick's researches have convinced him of the need for an acoustic/electric that can provide what he calls an "optimum platform" for its pickup, and his 'Renaissance' models are conceived as fully integrated systems, with instrument, transducer, and electronics all designed to operate together effectively. The 'Renaissance' has many electric-style features, including a solid, Gibson ES-335-type centre body section with hollow cavities on either side, a bolt-on neck, a slim, fast-playing fingerboard, and a deep cutaway. But other aspects of its construction - the braced, solid wood top, the overall shape and light weight - are typical of an acoustic instrument. Rick recognises the guitar's 'hybrid' status by designating it an 'ampli-acoustic,' and he produces it in different configurations: there are six-string, twelve-string, baritone, and nylon-strung versions.

Rick Turner has a refreshingly straightforward attitude to the complex process of creating a new instrument. He describes it as "being like a slot machine - but instead of three windows, there may be twenty or thirty, and each one of those represents something important in the design. And what happens is that ideas pile up in the wheels behind the windows, and every now and then I can pull the lever, and the windows will all come up cherries - and I've got a new guitar design!" Rick certainly hit the jackpot with his Model T, which won the 'Best of Show' prize for 'retro' guitars at the USA's 1996 NAMM (National Association of Music Merchants) show. Its appearance was inspired by the oddly-shaped range of guitars and mandolins manufactured by the Chicago-based Kay company from the late 1920s until the mid-1930s, although these did not have the Model T's Formica covering. Rick says the instrument epitomises "taste carried to the absolute extreme!" His recent creations include 'Electroline' bass guitars ("designed to be the most flexible solid-body bass in your collection"), and the Compass Rose range of acoustic guitars and ukuleles. 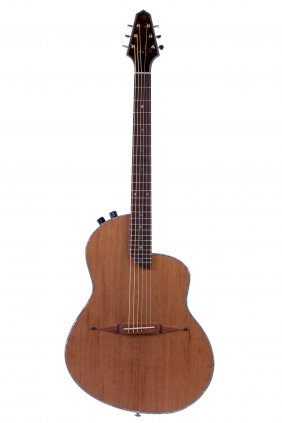 This 'Renaissance' has a solid cedar top, and a mahogany centre block with hollow sections on either side. Its bolted-on neck is maple, with a rosewood fingerboard, and its coaxial pickup system, developed by Rick himself, uses a pre-amplifier designed by Highland Audio - the specialist transducer company he co-founded in the late 1980s. The instrument's volume and tone controls are mounted on its left shoulder. 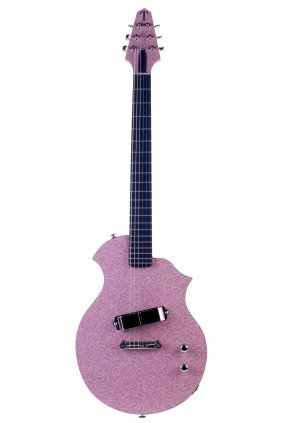 The Model T has a Formica-laminate top and back (in a pattern Formica has named 'Rosetta Boomerang'), and a Honduras mahogany body core. Its pickup is a modernised version of the 'horseshoe' design patented in the 1930s by George Beauchamp and used on many Electro and Rickenbacker guitars (see Rickenbacker article).