Having a guitar custom-made is not dissimilar to being measured for a Savile Row suit. Every contour of the instrument, and every aspect of its look and feel, can be precisely tailored to a player's needs, with results that combine elegance and comfort with the highest quality and durability. Trevor Dean, whose one-man company, Rosendean, is based in the Southern English town of Woking, has been building custom instruments professionally since 1989. His 'trademark' single-cutaway guitar shape derives from the designs of an earlier British pioneer, Emile Grimshaw (1880-1943) - a musician and luthier who ran a successful banjo- and guitar-building business in London with his son (1904-1987), also named Emile.

Rosendean's best-known client is the distinguished UK jazzman John Etheridge (b.1948), who commissioned the six-string Black Ruby model seen here. Etheridge is a hard-working player with a vigorous technique, and his Black Ruby is designed to withstand a good deal of wear and tear. Its back and sides are made from black-eyed Iranian larch, giving exceptional lightness and strength, and Trevor has protected the edges of the body with plastic binding. The instrument offers an impressive range of tones, and its six-way control circuit and special high-pass filters ensure that, in Trevor's own words, there is always "treble to burn."

The seven-string version of the Black Ruby bears a family resemblance to the Etheridge model, but has a mahogany back and sides, wooden bindings, and a single neck pickup. Its owner asked for a brass tailpiece covered in wood; Trevor normally uses nickel tailpieces like the one on the third Rosendean model in our photographs: a Black Diamond archtop made for musician Stewart Cockett. In an article published in Jazz Guitar International magazine, Stewart recalls how, while the instrument was being built, he would call at Trevor's workshop every week to check on its development. "From November 1997 the guitar progressed quickly...Eventually the neck was fitted and I could sit [it] on my knee and get a sense of its size and balance. I was impatient to hear it, but weeks of finishing and polishing were still to come before strings went on and we heard how it would sound." The completed guitar proved to be well worth the wait. Stewart describes it as "quite fantastic," and characterises its tone as "full, smooth, evenly balanced and totally inspiring...[it] will stimulate a whole new musical direction for me."

The Black Ruby is a semi-solid design, with seven internal compartments. Its body is 16 inches (40.6cm) wide, with a top carved from bear-claw pine, and back and sides of Iranian larch (a material that has seldom, if ever, previously been used for guitar making). Trevor Dean fits Kent Armstrong pickups to all his instruments; this model features five single-coil units, which were hand-built to his specifications. 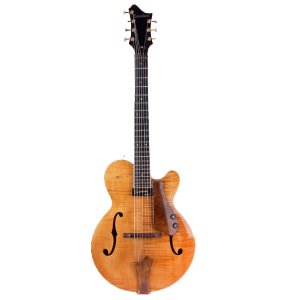 A 16-inch (40.6cm) guitar, like its six-string counterpart, this instrument has a pine top and mahogany back and sides. Its pickup is a Kent Armstrong humbucker, whose volume and tone controls are mounted unobtrusively on the pickguard.

The Black Diamond is an 18-inch (45.7cm) hollow-body archtop designed for both acoustic and electric playing. It has a pine top, and a back and neck made from maple. Its fingerboard is ebony; the headstock and pickguard are waxed Brazilian rosewood, and the body bindings are maple, ebony, and satinwood. The natural blonde finish, nickel-plated hardware, and abalone dot markers all contribute to its simple, but elegant appearance; its owner, Stewart Cockett, wanted it to look more like a 40-year-old vintage model than an obviously new guitar.