This rare and very fine viola is very important in being of true contralto form, a well-proportioned player's instrument that is also definitive of Landolphi's working style, and provides ample clues to his training and background. Landolphi was of German origin, but his early masters in Milan were Paolo Antonio Testore and Giovanni Battista Guadagnini. Three elements seem to fuse in this viola- traces of the German school in the slightly stiff outline and scroll form, Testore in the full, rounded arch, and Guadagnini in the fine orange-brown varnish, and the detail of the marking-out points around the eye of the scroll. 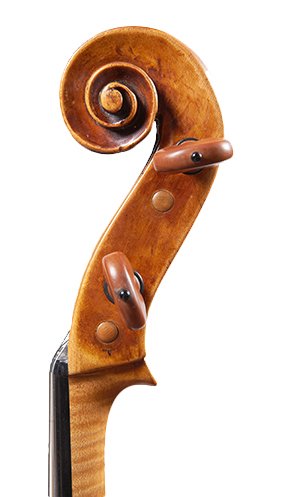 The full arch in fact recalls the great Brescian masters, wholly appropriate to a viola, where internal volume is at a premium, and a high, strong arch provides necessary resonance. Landolphi quickly adopted a flatter, more Stradivarian arch for his violins, so it is significant that he retained this form for violas. There is a small channel around the edge and through the corners, deeply cut but not wide enough to impinge greatly on the vibrating area of the plates. The edges themselves are carefully wrought, the original shaping crisp and well preserved, but Landolphi was, like Testore, not primarily concerned with accuracy of purfling, and the wayward corner points, and the straightened approach to the corners themselves are typical of his workmanship. The back is made from a fine single piece of quarter sawn maple, the figure regular and well-marked, although becoming fainter on the treble flank. The ribs are of mixed stock, and the scroll itself of plain, slab cut maple. The shaping of the scroll itself shows the very German, Staineresque mannerism of extending the last turn around the eye, but the pin-marked eye certainly brings Guadaginini to mind, and the whole effect seems to anticipate the style of Giuseppe, Giovanni Battista's son.

The front is of two pieces of spruce that appear to be mis-matched, but the cut is not accurately on the quarter, and the variation between the grain, broad and curving on the treble side, and slightly more compact on the bass side, may simply be due to this eccentric angle of cut. The soundholes are short and widely spaced, very typically Landolphi, not fluted in the lower wing, both wings being rather short and abrupt, but the whole imbued with character and originality that comes directly from the broad spectrum of influences that Landolphi benefitted from. His greatest advance was in the varnish. This viola has a fine and well-preserved coating of rich, transparent golden orange, far removed from the monochrome, opaque varnish of Paolo Testore, but obviously closely related to the gorgeous recipe Guadagnini introduced to Milan in the 1750s. Perhaps a little more brittle than the great Stradivari varnishes, but amongst the very best of this late classical period, with a warm, golden ground shining through.

The label is fine, original and characteristic, and bears the latinised form of his name, which has many variant spellings. The date of 1767 puts it firmly in Landolphi's mature period, some nine years after Guadagnini's departure from Milan and the year of the death of his former master Paolo Testore.